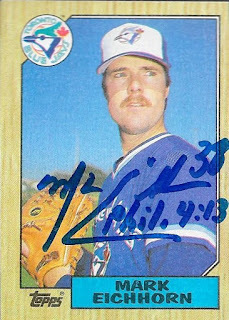 Just plugging along, getting my TTM success posted and here is a success from a former Oriole.  I got 6 cards back from Mark Eichhorn.  I added yet another 1987 to the album with the card, here. 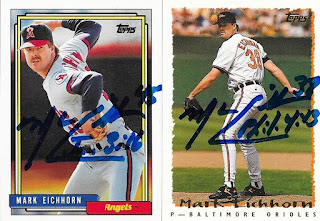 I sent off two other Topps cards, this 1992 and 1995.  I didn't have but two cards of Eichhorn as an Oriole, and the 1995 was the only Topps year that I had.  I have a ton of 1995s to send out, still.  It really helped that I had those sorted by number and was able to pull out everyone who signed TTM. 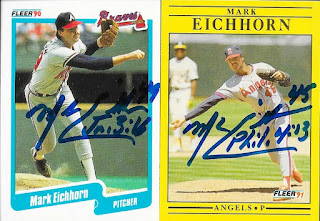 I kind of neglect Fleer, even though I talked about how much I liked some of their sets the other day.  The 1991 Fleer cards always look nice when signed.  I don't believe I have gotten very many 1990s signed, though.  I don't keep track of any other brand but Topps base, so who knows.  I may count up everything someday, but that won't be today. 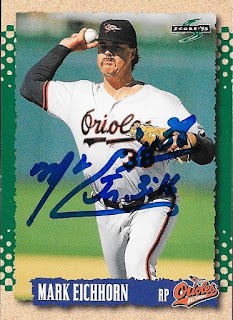 Finally, here is a 1995 Score showing Eichhorn in an O's jersey.  I've said before that I really like this set, and I was really happy with how this card turned out.

I mailed to Eichhorn on November 14 and got the cards back on February 10, for an 88-day TAT.
Posted by William Regenthal at 4:02 PM