Finally, Chris is Getting Into Cards!

Finally!  Yesterday, as I was sitting in front of my laptop, writing a post about Gary Carter, I looked over and saw a sight that a lot of dads dream of seeing.  I looked over to see my son engaged in my hobby!  Chris had grabbed his box of cards from his room along with his card album that we had been putting his wrestling cards in and filled each and every album page with baseball cards. 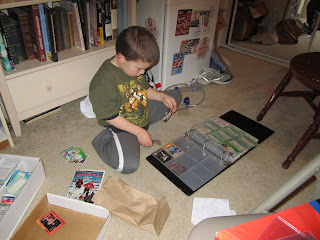 He did not discriminate as to which cards went where, he just picked ones out that he thought 'looked cool.'  In the end, I helped him pick out cards as he slid them into the sheets.  He got the box of cards from various packs that he would open from the card shop and card shows that we would visit.  Some of the cards he has are actually quite nice.  He took several of the Tim Lincecums that he has picked up and added them to the album.  I saw a Bobby Abreu Bowman Rookie in there as well.  The only thing I had any real input on was the final two pages where he asked me to pick out card for him.  I went through his box and helped him make two pages of Hall of Famers.

It was a really nice way to spend an hour or so, just looking through 90s junk wax and helping my son add to his album.  He wasn't worried about condition or book value or name recognition.  He wasn't even worried about which teams were represented.  He just wanted to put cards into an album.  I sometimes wish we could all step back from the hobby and break it down into those simple terms.  I find myself not as worried about book value or condition anymore, but instead I have realized that I would rather have cards that told a good story or ones that would make a good blog post.

I plan on picking Chris up another album and some sheets sometime soon so he has a new album to fill.  He has said that he wants to do some trades with people,so I think I will help him get some more Tim Lincecums or some wrestling cards using what he has in his album.  I think it might be good for him.  I know it will be good for us, as we spend the time together doing something we both enjoy!

Posted by William Regenthal at 7:05 PM

great post. as a new dad, it hit home!

It's a beautiful thing. The important thing is that your son enjoys himself.

My son is getting into as well. He wants to collect players I hate, like LeBron James and Larry Bird, but I don't care. I enjoy seeing him getting into the hobby.

This is too cool man. Too cool! I'm glad he is developing a taste for baseball cards!!!!! Awesome post!

It's great to see Chris getting in on the action. Maybe his FanFest experience sparked an interest.

This is great! I hope I experience the same in a few years!

I have actually given 90% of my Cubs and Cardinals cards away to my nephews adfter seeing how much they were getting into them. They got a kick out of getting them and I got the fun of watching them go through them. I even made them custom albums-one Cubs, the other Cardinals.