Chris and I were bored this weekend (I think Saturday night) and decided to bust a box of cards that I had stashed away in the closet.  I have a couple boxes of 90s 'junk wax' sitting around so we chose 1994 Topps as the product that we were going to bust.

I had forgotten how sharp 1994 Topps looked.  Card collecting took a major hit following the 1994 season, when baseball went on strike.  The year before, Topps released the 1993 set, a behemoth of 825 cards, but slimmed back down to the 80s-90s standard of 792 cards. 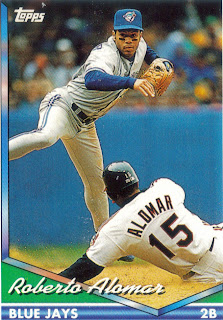 There are some good action shots in the set.  I think my favorite that made me stop and look was the above Roberto Alomar card, turning a double play on his brother Sandy.  I just like the concept of the photo. 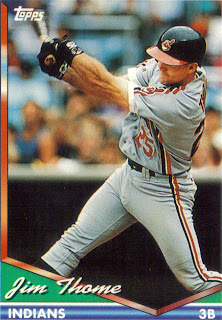 This is a great shot of Jim Thome possibly blasting a homer.  Who would have thought back in 1994 that Thome would have over 600 homers to his name? 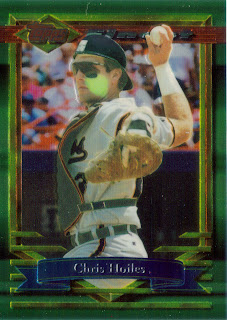 We got some pretty decent inserts.  In 1994, Topps Finest was an insert set, inserted one into every 36 packs.  The cool thing was that we pulled an Oriole.  It would have been nice if it was Cal, but I will take a Chris Hoiles. 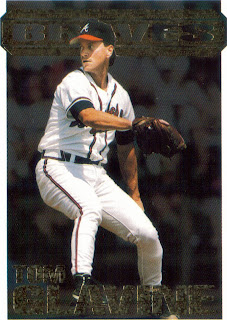 We were also lucky enough to pull a Black Gold Tom Glavine (which is up for trade).  These were one for every 81 packs (or so, I have already thrown out my wrappers).

In all, we did pretty well with our box.  Lots of good photos and a couple decent inserts.  Chris had a good time with it, so that really is all that matters.  I think I'm going to be on the lookout for some more cheap 'junk wax' boxes that he and I can bust together.
Posted by William Regenthal at 5:55 PM

When I got back into the hobby around 2008 or so, the first thing I started buying was 80s and early 90s boxes to rebuild the sets I had as a kid. I didn't care that they weren't worth much (if anything), I had fun reliving my youth. Then, I started appreciating the now. To me there has never been a set better than 1986 Topps, just because that was the one that got me started in this hobby.

BTW, did you happen to pull any Rockies gold cards? I still need a handful for my team set.