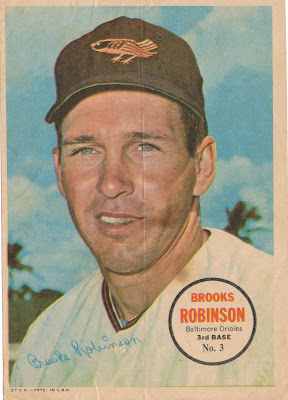 When Max sent me the email for the Raleigh card show, I originally thought that I wouldn't be able to go. We are on a TIGHT budget since we are paying rent + mortgage. When my birthday rolled around 2 weeks ago, my grandmother and step-grandfather (is that a word?) both gave me some money.

Deciding that a.) I know Grandma and Pastor T. wouldn't want me spending my birthday money on bills and that b.) I might be able to go to the show with Max, who, I haven't been able to spend as much time with as I would like due to both of our schedules; I decided that I was going to go.

I figured that, even with the limited amount of money at my disposal, I would try to knock some more 1955 Topps off of my list. Maybe even cross my fingers and be able to complete the set if we found a dealer looking to get some quick cash.

Max and I were able to sync up and arrange for me to pick him up at NCSU so that he could come as well. He, also, was a little strapped for cash, but did manage to save a little so that he might be able to begin his quest for starting the 1960 Topps set.

We were both disappointed when we got there that there were very few 'Vintage' dealers at the show. It turns out that there was a 'semi-national' show going on at the same time in Pennsylvania, and most of the bigger vintage dealers had gone to that show. Meaning, not a single person had any 1955s that I needed. If I needed some 1956s, I would have definitely been in luck.

After making the rounds at the show, we had seen a few random cards we both were interested in, but nothing jumped out at either of us like in previous shows. Max found a vendor who was selling the 1969 Topps Fold-Outs really cheap and picked up an Al Kaline for $2.00. While he was looking at the two Kalines in the stack, I saw a bird logo sticking out from farther down in the pile. Yep, Brooks Robinson!!!

Based on my calculations, including the $4.00 entry into the show (thanks to Max for the $1.00 off coupon) it appears that I spent $17.50 total at the card show and ended up with some blog-worthy stuff.

We were definitely disappointed in the fact that neither of us were able to have that 'amazing' card show moment (see my previous post about getting the 1962 Mantle, or Max's post about his Kaline RC), but, seeing as how the both of us are struggling lately, we managed to have a productive outing.

As always, any time I am allowed to spend with Max, my best friend, is priceless in itself (go ahead and throw up in your mouth a little). I really appreciate being able to have such a close friend with the same interests as I. Thanks for making time to come and hang out buddy! Let's do it again the next time around in December!!
Posted by William Regenthal at 7:08 PM 1 comment:

Saturday, while hanging at the shop, I picked up a pack of SP Legendary Cuts (which, in my opinion, is the best product UD has put out this year). Insode the pack was this awesome Cal Ripken that I knew, for sure, I didn't have in my collection. It is so hard, now, trying to figure out which Cal's I have and which I do not; seeing as I have 400+ of them... 400+ DIFFERENT Ripkens... Crazy, huh? 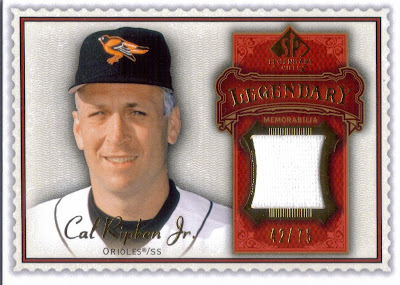 I also picked up a pack of Topps Ticket to Stardam and pulled this WBC Ticket/Relic. I have no idea who the player is, but its a cool card nonetheless. Be sure to keep an eye on Pete's blog to see his awesome pull... 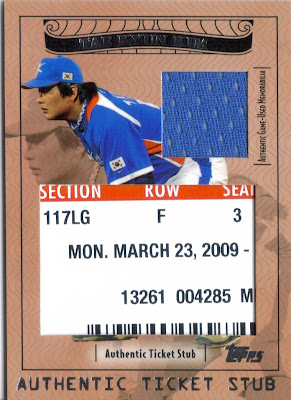 Speaking of Pete, he hooked me up with the following UD Goodwin O's cards. I, for one, like the Goodwins, even though they are eerily similar to Topps' Allen & Ginter. I have seen a few really cool retired player cards (including Bo Jackson). 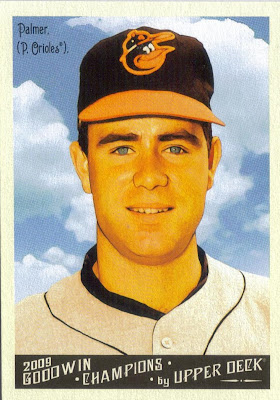 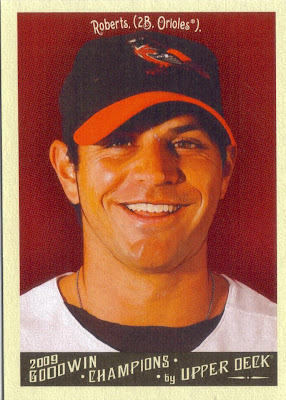 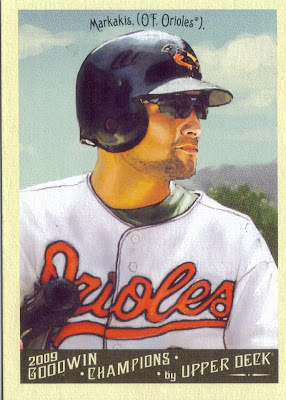 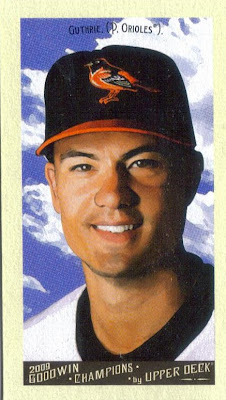 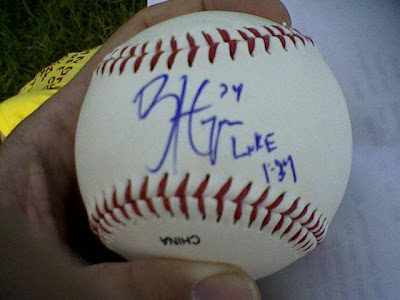 After a failed attempt to meet super phenom Bryce Harper (super phenom, mainly because of a well timed SI article, and strategic representation by THE Scott Boras) on Saturday, I was able to meet him on Sunday in Winterville at the Team USA 18-U vs Pitt CC game. I watched him lace a double down the right-field line and hit a couple balls to the warning track. There were no fireworks, no 570-foot home runs and cancer was not cured. BUT I was not disappointed. The day was beautiful, I had Chris with me, he had a blast, and we got to see some great baseball played for $5 (although, according to Team USA, the game was supposed to be free...
I already had a signed ball from Harper, which P.A. was able to get for me on Saturday (for my birthday too), so my main goal was to meet Harper and to try to get Chris and Max signed balls.
Success.
Harper was a nice guy, he patted Chris on the head and talked to him, and for once, Chris wasn't shy and actually gave up his ball to Harper on the first try. Usually if he has a baseball in his hand, he won't give it up. 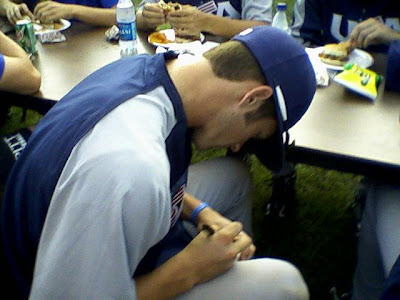 All in all, it was a good day, and I like Harper's swing, even if it doesn't cure cancer...
Posted by William Regenthal at 10:10 PM 10 comments: 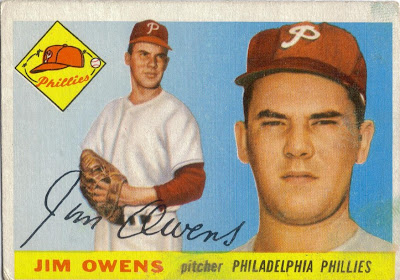 Yep, that's right! This time, I wasn't drunkenly bidding on ebay either, haha. I got card #202, Jim Owens. He looks so pleased to be joining my collection doesn't he? This came courtesy of the ebay gift card my loving (cough cough) wife gave me for my birthday. Hooray for 1955s!!!
Posted by William Regenthal at 9:56 PM 2 comments: 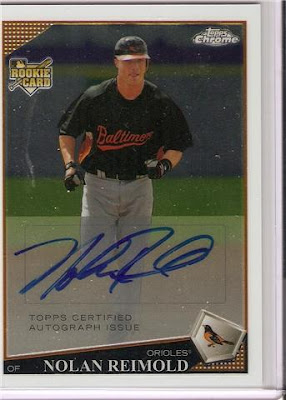 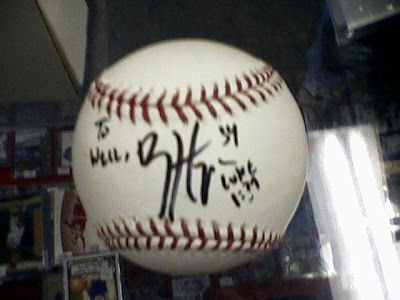 So, all in all, a pretty mediocre birthday was made much better by the thoughts from Mallory, Pete, P.A. and of course Mom. Thanks, it really means a lot that you guys went out of your way to try to make my day a little more special.
Posted by William Regenthal at 8:00 PM 4 comments:

Through the mail 1970s from Jim

My good buddy Jim hooked me up with some 1970 Topps to knock off of my list... Slowly, but surely I am taking this set down... See the scans for details, haha. 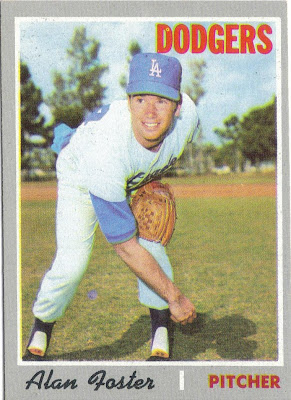 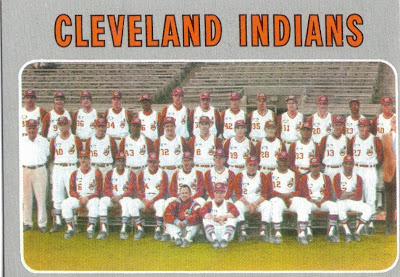 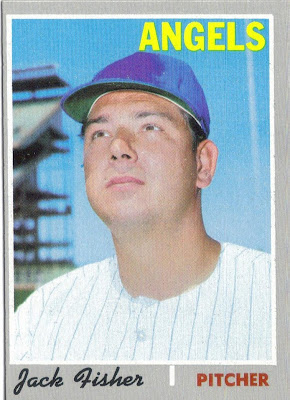 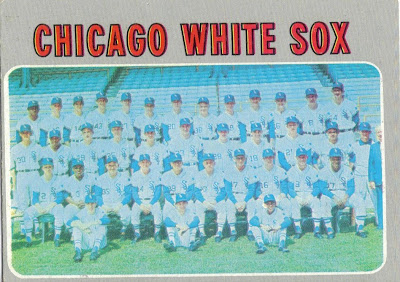 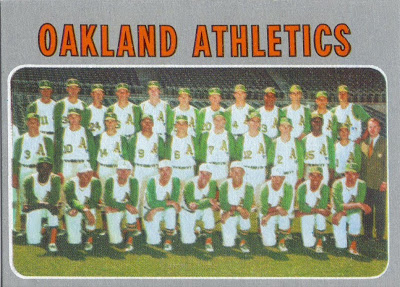 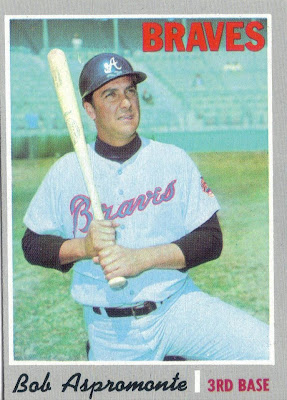 I opened a few packs of UD Goodwin on Saturday and got two SWEET cards: 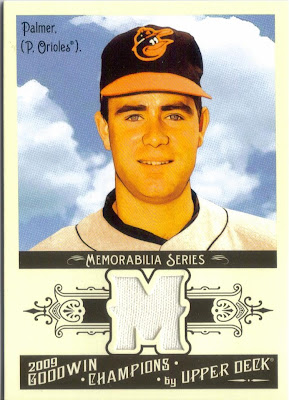 I got a sweet Jim Palmer GU Jersey and the awesome Brooks Robinson base card. They look really nice, althought eerily similar to Allen & Ginter.... Oh well, still nice to have in my collection. 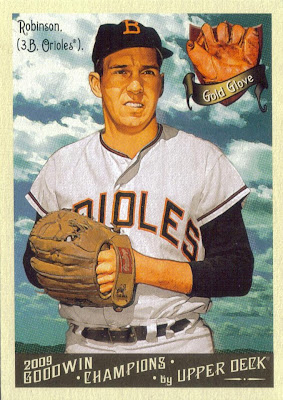 Along with my birthday plunder, I was able to get these two cards as well:
UD Icons Reggie Jersey 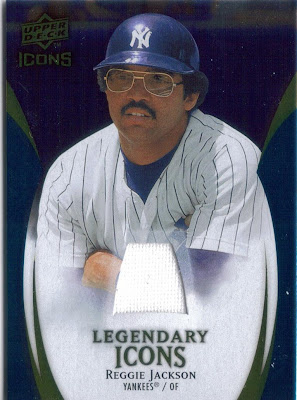 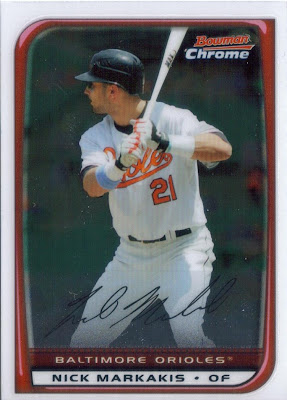 I also have a bunch of stuff I need to scan from past weeks, but I don't want to flood my blog just yet. I'll let you guys enjoy these past few posts first.
Posted by William Regenthal at 9:23 PM 3 comments:

Along with the awesome Brooks Robinsons from my Mom, Pete from http://droppedthirdstrike@blogspot.com got me a blaster box of Topps Chrome- 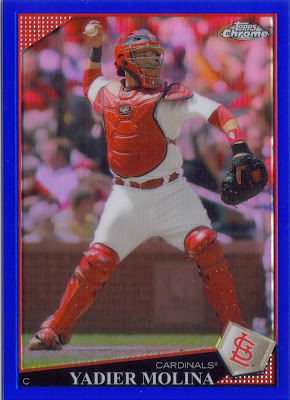 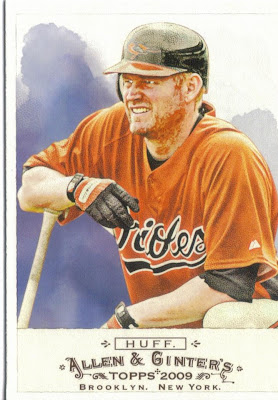 Kim made me an awesome birthday card as well. She sure has talent. Pete has talent too, he has an awesome impersonation of Mr Herbert from Family Guy. Hahahaha.
Posted by William Regenthal at 9:00 PM No comments:

Well, I got my scanner working with my laptop. I had to leave them alone in a room together and let them get acquainted, but they get along enough to get things done... haha. Although my birthday is today, my Mom gave me my presents early (on Saturday) because I wouldn't see her today. Here is what she gave me:
1965 Topps Brooks Robinson 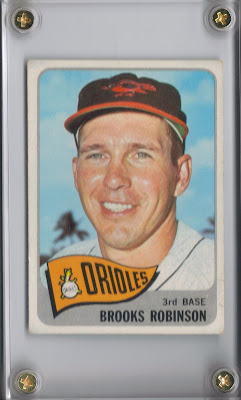 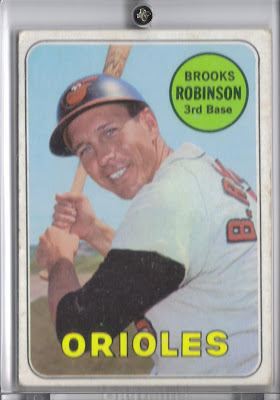 and, 1967 Topps Brooks Robinson, graded at 8.5. I now own all of Brooks' topps regular issue cards. 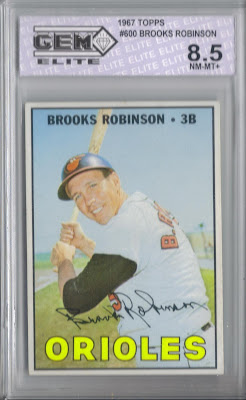 Thanks Mom! I'll be back with another posting shortly showing some more stuff that I got.
Posted by William Regenthal at 5:11 PM 5 comments:

This weekend, we will initiate my wife and son moving to Greenville. My wife starts at her new store on Wednesday!! My birthday is Monday. The house is looking good and getting showings, and now we will have been moved out of it (for the most part). Card shop on Saturday. Busy weekend coming up!!!!!! Hopefully, I can get my scanner hooked up to my laptop and get you guys some scans of some stuff. Maybe be able to blog a little more often? Hope so!!!
Posted by William Regenthal at 9:53 AM No comments: