I went to the card show at Metrolina Expo today in Charlotte with my son Christopher and my brothers John (31) and Andy (13). I allowed myself a budget of $200.00 that I have saved up frown working weekends at the card shop. This did not include the cost of admission, etc which was only $5.00 for myself and John. Kids 15 and under got in free.

I went hoping I could find a good partial set, wax box or commons of some of the sets I am trying to build. I was able to find 30+ 1970 Topps cards for my set which has been ongoing. The highlight of this would probably be the Harmon Killebrew. I already had the Nolan Ryan and Hank Aaron to name a few.

I was able to find the 1960 Topps Brooks Robinson I have been trying to find for some time now. It isn't in the greatest of shape, but I got it for $15.00 and I am completely satisfied.

I found 5 1955 topps to add to that set which I am not really taking too seriously (I will probably never be able to afford the Koufax or Clemente RCs). I paid probably $20.00 total for the 6 cards. 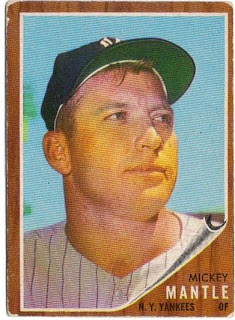 
Finally, I got some random cards as well, about 6 1983 Topps and a Bill Ripken 'Rick Face' from Lee, a customer who shops in the shop regularly and I got 2 David Price Tristar Prospects Plus cards and a 2007 Evan Longoria Bowman. These 3 were $2.00 a piece.

To keep Christopher happy, I bought him a Lightning McQueen car (for peeing in the big boy potty at the show) and an E.T. stuffed animal. $9.00 total.

John sold some of his football cards for $40.00 and bought a Manny Ramirex Gold RC and a Mike Piazza 1992 Bowman RC.


All total, I exceeded my budget by $20.00, but I was very satisfied and got some stuff jknocked out of my 1970 set (esp high numbers). On the way out, I ran into Pete and his girlfriend Kim (fellow bloggers WOO HOO).

I was a little disappointed that not a whole lot of people were there, but given these economic times, you can kinda see that coming. Hopefuly this won't discourage people from having shows as it was a really nice way for my brothers, son and I to spend some time together.
Posted by William Regenthal at 8:38 PM 1 comment:

Hi guys. The shop will be open on Saturday and I will be there. I don't plan on taking any Saturdays off anytime soon, so you guys should see me regularly. I also plan on taking some of my savings and spending a little at the card show. I am hoping to find a few things that would be a little harder for me to find. We'll see. How was everyone's thanksgiving? I cooked the bird for the first time and it turned out awesome. I took some tips from a friend at work and it turned out great. Now we have a bunch of leftovers, woo hoo!
Posted by William Regenthal at 8:55 AM No comments:

Happy Thanksgiving guys. I'll be crazy busy, like this past week. Posts will be few and far between, but I do plan to blog about the Charlotte card show on Sunday...
Posted by William Regenthal at 7:17 PM 2 comments:

Sorry I haven't posted in a few days, I was out of town for work. It was nice to get home friday and find a box waiting on me... It wasn't cards, but it definitely was something i was waiting for since I was 14 or 15... Chinese Democracy by Guns N Roses. I pre ordered the CD from Best Buy for myself and my brother Andy. I was amazed that there was an actual CD in the case and that it would play in the player. They have pulled back this album so many times, i figured the CD would be blank at the last minute or something. It does exist and is actually very good. Christopher and I listened to the whole thing last night. He stood in front of the player and danced the whole time. A nice way to spend a friday night.
Posted by William Regenthal at 8:25 AM No comments:

During a 'pack opening party' with Babe-O-Licious, I pulled a redemption card: DANIEL ALFREDSSON05/06 NHL SP GAME USED AUTHENTIC FABRICS AUTO// CD# AAF-DA # TO 75... When I went to redeem it, it said that the card was not produced, please call for a replacement. So, I am, currently on hold. Maybe they will let me swap it out for a sweet baseball card instead since I only included the Hockey cards because Mallory (my wife) is a hockey fan... I'll let you guys know what they let me swap out.
Posted by William Regenthal at 4:51 PM No comments:

As I said before, I build sets of Topps cards. I am also a HUGE Orioles fan. I started liking the Orioles since MLB Baseball for NES came out. My older brothers would always get the A's (they were roided out even then) and I would always pick the O's because they had NEON Orange uniforms. Good times. My favorite Oriole is Cal Ripken, but I also am fond of Brooks Robinson, Al Bumbry, Boog Powell, Jim Palmer, Harold Baines, Brady Anderson, Brian Roberts and Nick Markakis. When i post again, i will begin scanning and posting cards that I have on here... can't wait can ya?
Posted by William Regenthal at 6:28 PM No comments:

Woo Hoo. I finally got the guts to 'blog' about cards on something other than my myspace. Thanks for talking me into it P.A. Hope i don't disappoint. Right now, I don't have a specific plan as to what exactly I plan on blogging about. First things first, lets put a plug in for the card shop i help out at: All About Sports located at 397 Jonestown Rd., Winston-Salem, NC. I plan on, at some point, taking 'special orsers for the shop through here and maybe expanding our reach a little bit... We're not all that sophisticated yet though, so we'll see how that goes. I also plan on putting up some pics etc of awesome cards I have come across. Everyone knows which i will start with. If you don't know, how about sending me some comments trying to guess?
Posted by William Regenthal at 5:33 PM 2 comments: