Baseball Cards Are Stupid: A Story on How I Got Into Collecting 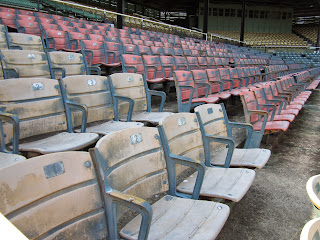 I remember telling my older brother, John, that baseball cards were stupid.  He was a huge collector at the time, and I remember him getting excited over Wade Boggs cards, but I couldn't understand why.  I was maybe 7 or 8 and didn't know what the point was in opening packs of baseball cards and hoping to get your favorite player.  You see, I wasn't even a baseball fan back then.  I had no idea who the Baltimore Orioles were.  I had never been to any kind of a game (as far as I knew).  All I knew was that John loved baseball cards.  That was his thing.

Not too long after telling John that baseball cards were stupid, we got one of those Troll book order forms from school.  My mom would always let me circle the books I was interested in, and she would always add a few extras that she thought I may like.  We weren't very well off at that point in time, so getting those new books was pretty exciting for us.  When the order came in, for whatever reason, Mom had selected a small book about baseball cards that came with a little album and a pack of cards.

I knew John thought these things were like gold, so I was happy to be getting some cards that I could hold and say "Nyah nyah, I have some cards that you don't have!"  I spent that afternoon laying on my bed and reading each and every card.  I remember two of them, Hipolito Pichardo and Fred Lynn.  They were 1989 Topps cards, and I remember thinking that I liked the design.  I wish I could say that I still have those cards, but the truth is, I'm not sure.  My best guess is that I do, and they are in my completed 1989 set, since I had collated those in order years ago and put them up before I got into making sets.

So, after that afternoon of looking at all of those cards, I decided that I did, in fact lie baseball cards and I wanted to get more.  How do I go about this?  Well, even though we didn't get along very well (typical of most brothers around that age, I believe), I reluctantly asked John how I was supposed to go about adding to my collection.

He responded by asking, "What is your favorite team?"  I didn't know.  I knew that with him being the older brother, I wasn't allowed to copy him by saying the Boston Red Sox.  I knew my brother Philip liked the Oakland A's and San Francisco Giants, but I couldn't copy him, either.  That sucked because by then, I knew who the A's were, they were the team that you could select on our Nintendo game and win every time.  Darn.

I couldn't even pick the A's most of the time on the game, because of my older brothers.  So I would have to pick some other random team.  I had always found myself picking the Orioles on that game because they had these crazy looking neon orange uniforms.  So, to answer John's question, I said, "Well, I guess the Orioles."  John said, ok, you should look for Orioles cards when you open packs.  He went to his room, and I went to mine.  A few minutes later, John came into my room and handed me a stack of cards.  "If you like the Orioles, this is their best player.  You should look for his cards."  I don't think I have to say who that player was, because I'm sure you all know it was Cal Ripken.

My mom used to take me to two different card shops in the Winston-Salem area when I was younger.  There was Season Ticket, a card shop owned by Chandy Greenholdt, who is now a fellow vendor of mine at the Raleigh card shows.  The other shop was Sportscards and More, which was owned and run by a guy named Jeff Hayes.  Jeff looked just like Rafael Palmeiro, which is one of the reasons that I liked Raffy growing up.  Mom would always take me to the shop, and the both of us would buy a bunch of packs.  Neither could wait to open them at home, so we would sit in her car and open them in the parking lot.  This is actually something that I still do, to this day.  I will take Chris to the card shop, buy our packs, then the two of us retreat to my truck and open packs.  Many times, I have to go back into the shop to show Wendell what I pulled, and buy a magnetic case or two.

The two card shops in Winston have since closed.  I got out of collecting when I turned 16 and had to get a job.  It wasn't as much fun spending my own money on cards, plus I had to pay for my car, insurance, gas, etc.  Every now and then, I would look through cards, and even buy a pack of two looking for the newest Ripken, but I was pretty much done.

Fast-forward to 2005; I took a friend of mine to a series of Orioles game against the Yankees.  I had still followed the Orioles all those years, and was finally able to go to games, myself.  I had been to a couple Orioles games in 1999 and wanted to try to take my own trip.  So, this friend and I made a trip of it and caught a couple games.  In the second game, Brian Roberts hit a walkoff home run in extra innings.  When I got home from the trip, I had the urge to start collecting again, and this time, I would look for Brian Roberts cards.  The old Sportscards and More had reopened as All About Sports, and a lovely lady was now the main person behind the counter.  She was really awesome in helping me find some new cards to get into, and also helped me search the dolar boxes in the shop for Roberts cards.  We would go on to become good friends, and after shopping there a while, she offered for me to help out at the shop in order to make some extra money.  If you hadn't guessed by now, that person was my friend, Babe.  She was instrumental in helping me get back into collecting.

Finally, while working at the card shop, I met two guys who came in fairly regularly.  We would hang out at the shop and talk cards while the Yu Gi Oh tournaments were being held.  Pete and P. A. were both bloggers and tried to convince me that I could tell some pretty good stories about the different cards that came through the shop.  I had only done a little blogging on my Myspace account (Myspace?  Was that really a thing? Haha!), so I figured it wouldn't last long and would be pretty lame.  However, I decided to give it a shot.  I couldn't think of a title, so I tried to think of the lamest thing in baseball.  "Walking in a run with the bases loaded" was way too long, so I settled on foul bunt.  I didn't even capitalize it, because I felt that is was insignificant and unassuming.  I feared that I would write a couple posts and forget to maintain it.  I started the blog, thinking that it would only be about a few cards and the card shop, but it evolved into something more.  It has become my showcase for everything in my collection.  It helped me start a branch of my collection (HOF signed baseballs) that hadn't yet begun.  It helped me do one of the things I'm most proud of (my Virgil Trucks interview).  I have even blogged about non-card stuff like wrestling, and music.

My musical taste has evolved just as much.  From being a huge Bon Jovi fan at 8 years old, to falling asleep to Guns N Roses (Use Your Illusion I is still, to this day, one of my favorite albums of all-time), to being really into Aerosmith during college.  I now am a huge Pearl Jam fan.  I always got into music late, and didn't really discover Pearl Jam until college.  I do, however, like all of those aforementioned bands.

Thank you all for taking a trip down memory lane.  I am asked a lot of times about how I got into collecting, and how I became an Orioles fan, even though I'm not from Baltimore.  Speaking of that, I actually have to remind people on Instagram that I am from NC, and not Baltimore.

Please take a moment to check out my friend Frankie's blog.  He is currently doing a contest over at "My Life In The Sports Card Hobby" and is interested in hearing about how everyone got into collecting.

Thanks for reading, everyone!
Posted by William Regenthal at 9:33 AM