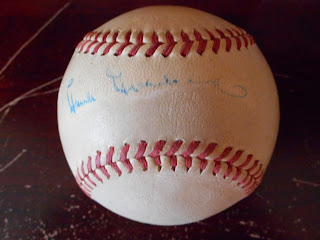 Probably the most epic of all of my pickups at the National was my 116th Hall of Famer on a baseball.  Sundays at card shows are always the best days to go for deals, and the National was no different.  Nothing like taking advantage of vendors who don't want to load up a bunch of stuff for the long ride home.

There was a nice Greenberg auto at the BBC Exchange booth, but they wanted $2,000 for it.  I couldn't drop that much on a ball and live to tell about it, so I just admired it every time I walked by and looked for other baseballs to add.  Finally, I was looking at some balls in a huge shelf and saw this Greenberg at a much lower price.  I asked the guys at the booth what the lowest price for the ball would be, they responded with an even lower price after calling the owner on the phone.  When I told them I would think about it, the owner of the ball must had heard, and then offered his final lowest price.  The price was far too good to pass up, so I worked it out and purchased the ball.  I had to do some self-financing, but this is why I went to the National.  I went to find stuff that I normally couldn't find at home, and I bought this ball because it would have been much higher on Ebay. 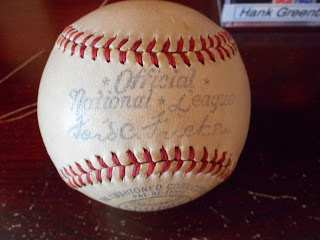 The ball is an old baseball in itself.  It is a Ford Frick ONL ball.  The vendor told me that as far as he knew, it was signed in 1954 when Greenberg was a GM with the Indians.  The ball had a full LOA from PSA, which assured me that it was legit.  The LOA says that there is evidence that other signatures were removed from the ball, but I can't tell, even with my glasses on.

Greenberg is a really tough ball to get, and aside from Jimmie Foxx, he might have been at the top of my HOF ball want list at the time.  This ball supplants my Carl Hubbell or Mickey Mantle as the best HOF ball that I have at the moment.

Normally, when one spends a large amount on something like this, there is a good bit of buyer's remorse.  I can tell you that I have felt none of that with this baseball.  My birthday is in September, and I look at it as a birthday present to myself.  I work anywhere between 45 - 50 hours a week, my bills are always paid on time, and my family never has to want for anything.  I was able to take a little chunk of money and have a ball (pun intended) at the National.

Greenberg would later become the general manager of the Indians (and part owner with Bill Veeck) in 1949.  He would remain as GM and part owner until 1957.  He later joined Veeck at part owner of the White Sox for a few seasons.