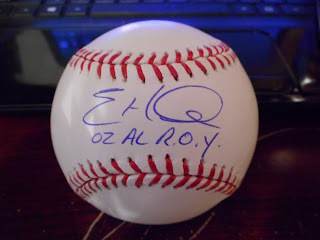 Another of the free signers was another award winner, 2002 AL Rookie of the Year, Eric Hinske.  I will always remember Hinske for his winning the award with Orioles Rodrigo Lopez finishing runner-up.  Lopez had a really good year, that year, and an argument could have been made for him winning.

Hinske had a pretty good career.  He played for 12 years and amassed 947 hits, 137 home runs and a .249 batting average for the Blue Jays, Red Sox, Rays, Pirates, Yankees, Braves and Diamondbacks.  He won the World Series in 2007 with the Red Sox and in 2009 with the Yankees.

Hinske was pretty nice, but didn't go above and beyond like Tom Gordon did.  Nothing against him or anything, but it was hard to pass Gordon.  The 2002 AL Rookie of the Year inscription was free, which was nice.  I do like a good inscription, so this worked out well.
Posted by William Regenthal at 7:48 PM