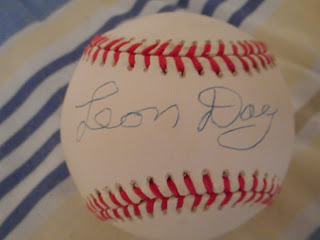 I added my 117th Hall of Fame signed baseball when I got a steal at the National from the same dealer which I purchased the Greenberg ball.  Day baseballs usually sell for around $150-$200, and I got this one (JSA authenticated) for only $100.  Not a bad deal at all.  You don't see a lot of Leon Day stuff, so to be able to find this one was a treat in itself.