Another Set Need From The National 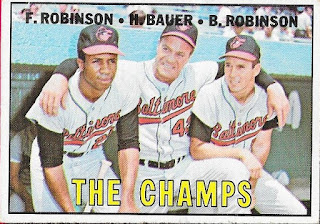 I'm still way off on needs for the 1967 Topps set, but I have them all listed out in my notebook.  I wanted to make sure the cards I needed were listed in there at least, before I went to Chicago.  I figured that I might see some cheap 67s, and I was right.  I got this card out of a bargain bin and snatched it up, since I knew I needed one for the set.  I already had one in the Brooks PC, but I didn't want to rob from that to work on the set.

I also found another 67 that I needed in one of my own boxes at the house, so, that's two cards down, a lot to go.  I will work to get the needs list posted on here.  Since I finished off 1959, I plan on knocking out 1967 and 1969 before I jump into more vintage sets.  One set I really need to get done is 1972. I bought a lot of those in bulk, hoping I could make a dent in that set.  I did ok, but I still need quite a few more.
Posted by William Regenthal at 8:45 PM