Yeah, this blog is normally about baseball cards, but really, it has been a sort of diary for me as well. I don't often let emotions show, unless I am ranting about the Orioles, but the last couple of days have been pretty tough.  The outpouring of support that I have gotten is amazing, and so appreciated.

Today, I picked up Jericho's remains from Carolina Pet Crematorium.  They did a fantastic job for me, and the urn I picked out is pretty classy and very fitting.  You can see it above.  He will now rest atop my desk, overlooking his domain.  Some folks say that they "own" a pet, but I am here to tell you that this cat "owned" me.  I sure hope he knows just how much I miss him.  I didn't want to run the issue into the ground, but I am having a harder time that I ever thought I would.
You see, I cared for him and protected him ever since I took him from that couple in the parking lot at Harris-Teeter.  I've always been the sensitive sort, especially when it comes to animals.  There was once a cat that had been hit by a car in the parking lot, and I was really upset and freaking out a bit, and one of the kids that worked there had the nerve to say "come on man, it's just a stupid cat."  I'll never forget that poor thing.  It's just how I am.

Back to Jericho.  He really was special.  He was among a litter of four kittens that a couple nursed after having found them when the cats' mother had been run over by a car.  They nursed the kittens for as long as it took to get them to where they could eat on their own.  When they were old enough, instead of taking them to the animal shelter, they decided to give them away for free in the HT parking lot.  That was a pretty fateful day, because my then-roommate had recently discussed adopting a pet for our apartment.  We each picked out our own cats, his a black one that he named "Hunter" and I picked Jericho because he resembled the family cat we had back home that was named Sam.

I always respected Sam because he was this huge outdoor cat with tons of notches in his ears from all of the tangles with wildlife that he had.  Sam was a badass; ask any of my siblings and they will tell you.  He was the reason that I picked Jericho that day.  When Sam lost his final battle (with a raccoon) and died, I was upset.  I even cried a little.  He was 12 or maybe a little older, but I knew when he passed, that raccoon had gotten the biggest fight he ever bargained for.  It got an even bigger fight when my brother put a bullet in him, but that's another story for another day, but good riddance, raccoon.
I said in a previous post that three of the four kittens were given homes by me, my roommate Mike and my friend Jennifer.  I have no idea what happened to that fourth kitten.  For all I know, it got a loving home, and may even still be alive today.  I know Mike's cat (Hunter) passed away unexpectedly a couple years after he and I went our separate ways, and Jennifer's cat (Casey) ran away not too long thereafter.  This left Jericho.
Anyone who came to my home would be greeted by Jericho not too long after their arrival.  He would make his presence known by jumping up on the couch and demanding to be loved.  He never knew a stranger, and was skiddish only around my little sister, Christy, who was 2 when I got him and tried to ride him like a horse.  Even recently, he would still hide from her (and she is now 15), and all young blonde girls (my niece being one of them) because he did not want to be ridden. 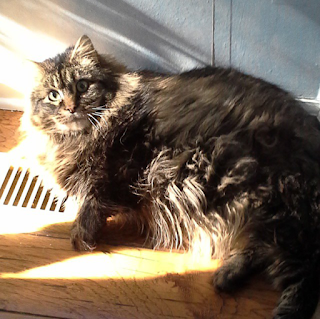 He would always come into the bathroom in the morning and plop on the floor in front of me, further reminding me that I have absolutely no privacy in this house.  He and our other cat, Ozzy, would compete for that spot in the floor, with Ozzy yielding to the older Jericho.  Ozzy would come in and taunt him, trying to goad a fight, every now and then.  This would cause some good entertainment in the mornings that made any bathroom reader unnecessary. 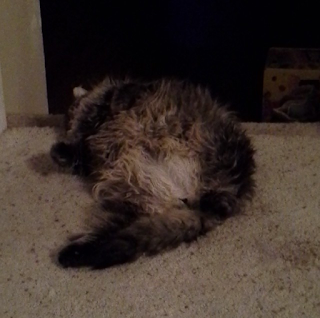 Jericho's favorite position, though, was the one seen above.  He would lie on his back, with his legs spread, leaving his special no-no parts exposed for all to see.  He didn't care, this was his house.  When the dog (Rocky) was brought in around Christmas 2012, Jericho paid him no mind.  Ozzy would taunt Rocky every now and then, bat him on the nose, just to mess with him.  Jericho, well, he just ignored Rocky because as far as Jericho was concerned, Rocky couldn't pet him.

I would joke at work with my friend Rae, who would pet-sit for us.  She would always tell me how good a dog Rocky was and how Ozzy would talk to her and demand attention.  She would then tell me "I had to poke Jericho because he would never move, just to make sure he was alive."  That was Jericho.  He did what he wanted, and had an amazing life.  I still think back to the other night when he passed, replaying it in my head.  I wish I had been able to just hug him and tell him it was going to be ok.  Jericho knew it wasn't, but I didn't.  That last bite to my arm wasn't any attack on me, I know it.  It was his final way of telling me, "Daddy, it's not ok.  I'm really hurting."  Well, buddy, I am glad that you were able to tell me that it was time and that you were able to go with Mal and I around.  I'm glad it wasn't overnight, for me to find you in some corner after I woke up.  I think that would have been far more traumatic.  Also, I am glad that I didn't have to make the decision to put you down.  I don't think I would have been able to function at all if that were the case.
God, I miss him.  It is the little things, really, that make you notice that a loved one isn't here.  Last night, Ozzy was on my lap (and, man, you can tell that he is down) and I wanted to get up, so Mal said for me to bring him to her, and she would let him lay on her for a while.  So, I picked him up, thought for a second, and started crying.  Mal asked me what was wrong, and I told her "Kitty get an airplane ride..." which is what I always said to Jericho as I put him on the couch every night before bed.

Today, when I pulled into the parking lot of the funeral home (the pet crematory is run by a local funeral home), my XM Radio was set to Pearl Jam Radio, even though I normally would have it set to MLB Network.  I just happened to have it set to Pearl Jam, and "Love Reign O'er Me" came on as I was set to get out of the truck.  That was a nice fit, but even better, when I had picked him up and was driving back to the office, Pearl Jam's "Come Back" came on.  The lines of that song fit everything I was thinking at that very moment, and then when Eddie Vedder sang the part "It's ok... It's ok..." I felt like I was being spoken to.  I cried.

So, the story of Jericho closes for now.  I will do my best to revert this blog, my facebook page and my instagram page back to as normal as can be.  I appreciate you all bearing with me.  I'm happy that I have this tool, this blog, and all of my friends.  Jericho's guestbook page (which you can check out here) had quite a few comments on it already, so much so, the funeral director made a point in mentioning it to me.

So, again, I will try to go to sleep tonight amidst memories of one of my closest friends that I have ever had.  A fat, lazy, sweet, demanding, lovable, huggable cat named Jericho.

**I haven't been able to thank all of you personally, but to everyone who commented on my last couple blog posts; everyone on Facebook, and everyone on Instagram - thank you so much for your stories about your own pets, your own losses, your love and support.  I never would have guessed how many of you really care, and it means a lot to me.  Thank you so much.**
Posted by William Regenthal at 11:22 PM