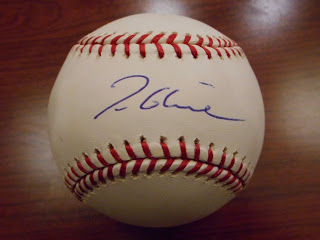 I picked up my 113th Hall of Fame signed baseball at the National Card Show when I got a steal on this Tom Glavine signed ball from the BBC Exchange booth.  I know they sell wax boxes at good prices, but I guess they have branched out into the signed memorabilia market a bit as well.  They had a lot of signed baseballs at really good prices (even Maury Wills at $10.00).

Glavine (b. 1966) played in the majors from 1987 to 2008 for the Braves and Mets.  He was a huge member of the Braves rotation (along with John Smoltz and Greg Maddux) for years.  I already had the other two, and adding Glavine completes that trifecta.