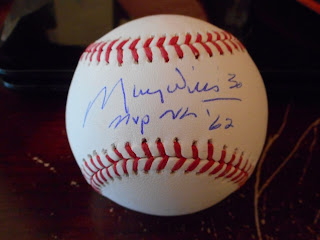 One of the other highly anticipated autographs that I was able to get at the National was Maury Wills.  He was actually the last VIP signer that I got (even though I still have another to show after this one).  Wills was really nice, and we chatted about the weather (believe it or not) during the signing.  As I walked up to him, thunder could be heard, and the both of us commented on it.  Then we could hear the torrential downpour that was going on outside.  It turns out, a severe thunderstorm was passing through Chicago at that time.  I don't believe any tornadoes were spotted, but I think we were as close to having one as we could.  A few minutes after Wills signed for me, the power went off in the venue.  It was a weird sight, for sure.