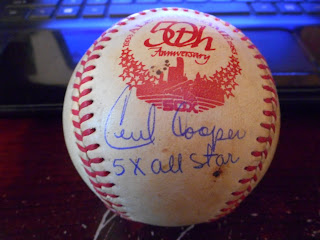 One of the coolest baseballs that I got signed at the National was this 1983 All Star Game ball by Cecil Cooper.  I got the ball for something like $15.00 off of Ebay right before I left for the show.  Max and I had spent some time on Skype trying to find specialty baseballs that would cover some of the guys we were going to meet.  I saw this one and jumped on it.  I know it is aged quite a bit and has that big splotch on it, but I believe it adds character to the ball. 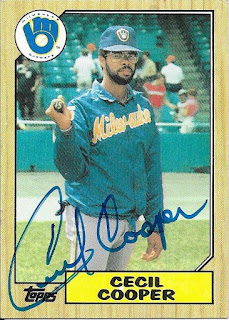 Max got this 1987 Topps signed for me, since we had extra vouchers for Cooper.  I provided some cards and Max got the signatures.  Since I had 1987 Topps cards coming out of my ears, I figured that getting a few signed would be nice.  They do, in fact, look good signed.
Posted by William Regenthal at 5:58 PM