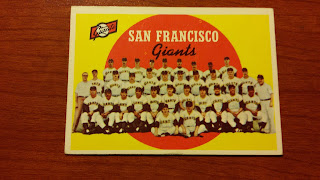 I met my second goal for The National, also on the first full day.  I walked around the entire show and filled out the rest of what I needed to complete the 1959 Topps set that I have been working on for a while.  I don't even remember when I started it; I believe it was when I completed 1955.  Anyway, I knocked off a bunch of them at one vendor, but couldn't seem to find the elusive card number 69, the San Francisco Giants team card.

Once I had it narrowed down to that one card, it took quite a while, with the help of Andrew and Max, to find an unmarked version of the card.  We had a hard time finding any version of the card, but finally tracked it down.  The quest for the Giants team card was almost as difficult as finding the Ripken Elite auto.

I now have both of those goals met, and I was happy to do it in the first full day.  This allowed me to concentrate more on looking for hidden gems, and also stuff for other people.