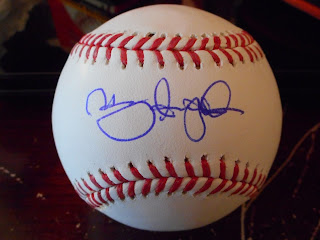 I think the free signer I looked forward to the most was Manny Sanguillen.  I kind of follow the Pirates a little bit, here and there, especially since I have been to PNC Park twice now.  Sanguillen is a Pirates legend, having won two World Series in Pittsburgh (1971 and 1979).  He played in the majors from 1967 and 1969 to 1980 for the Pirates and A's.

What sticks out most to me about Sanguillen, though, is a story that I read about the memorial service for his former teammate, Roberto Clemente.  When Clemente passed away, the Pirates held a memorial service for him that was attended by all of his teammates, with the exception of one, Sanguillen.  The reason he wasn't at the memorial was because he was busy diving off the coast of Puerto Rico in shark infested waters, looking for Clemente's body.  That's true friendship, right there.

According to Sanguillen's SABR page, it says that Sanguillen was actually supposed to accompany Clemente on his ill-fated flight, but had misplaced his car keys and missed the flight.

Sanguillen was really quiet during the signing at The National, but he was friendly when I spoke to him.  I thanked him for the autograph and moved along, since his line was so long.
Posted by William Regenthal at 11:08 PM