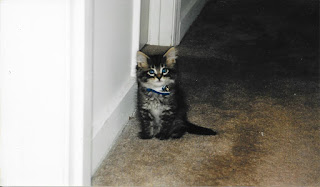 I always told my wife that when my cat, Jericho, passed away, I'd be inconsolable.  Well, I was right.  Tonight, at approximately 9:02PM, he passed away on the way to the pet emergency clinic in Greenville.

He had been acting funny the last couple of days, and tonight, we discovered that he had been sitting in his own waste all day.  I took him and gave him a bath, but sometime during the bath, he rolled over and pretty much stopped breathing. 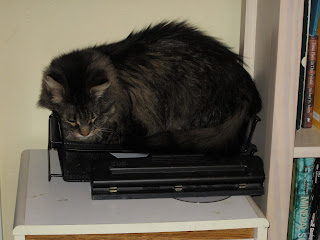 I got him from some folks who were giving away free kittens out of the back of a van at the Huntersville Harris-Teeter.  My former roommate and I each got a kitten, along with another friend of ours.  Of the three kittens that were given homes that day, Jericho had the longest life.

He grew up with me when I was in college, working odd hours and going to class.  I would come home exhausted, and he would crawl up onto the couch and lay on my arm, much like this photo.  Always the attention hound, he got mad at me one night when I was doing homework and wasn't paying him attention.  He promptly walked over to my bookbag and peed on it, since the things I was paying attention to came from the bag.  That was Jericho.

He was a quiet cat, never making a sound, unless he wanted food.  Then, it would be one tiny, quiet whisper of a meow.  That's all it took.  His bowl would be filled.  He had a good life, these last 13 years. 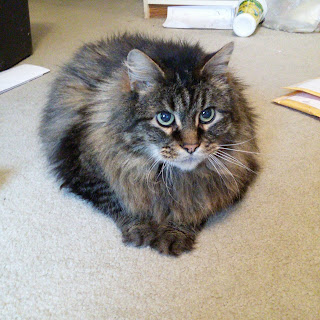 Goodbye old friend.  I love you, and I'll sure miss you.  I wish your last moments were in my arms instead of that stupid bath, but I didn't know.

I love you so much.  I wish you could see how much of a mess I am right now over you, you silly fat cat.  You'd probably hop up onto my lap and grab my hand with your paw and demand that I pet you.  It's what you did.  God, I'll miss you so much.
Posted by William Regenthal at 9:50 PM