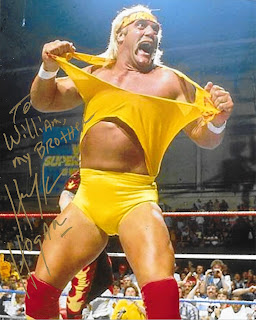 A late addition to the autograph lineup, I was so excited that Hulk Hogan had been added.  My son, Chris, is a huge wrestling fan, as I was at that age.  Chris was promised $100 if he passed his EOGs (end of grade testing), so when I saw that Hogan was added to the signing list, I thought Chris may want to upgrade.  I called him; well I called my mom, since Chris was staying there for a week this summer, and I asked Chris if he wanted to get to meet Hogan.  There was complete silence on the phone.  I asked him again and he said, "Yeah, of course I want to.  I'm so excited I might die."  So, I bought a voucher for Chris, and one for myself.  I also bought a photo op for Chris, just to be sure my nervousness didn't result in a crappy, shaky photo.

I ordered a few 8 x 10s to get signed, and the original ones were damaged in the mail.  Instead of risking them not getting here in time, I decided not to fight the company I ordered them from, and just re-sent my order.  I'm glad I did, because the second batch came in without any damage, and I was all set to go.

In the days leading up to the National, Hogan met some controversy in the mews based on some comments he made a few years back.  I'm not going to get into that here on my blog, but the comments were very unfortunate, and I'm certain Hogan now regrets them.  We all have made mistakes in our lives, and as the great Buck Showalter says "We all hope that our lives aren't judged by our worst mistakes."

In addition to the recent controversy, on Friday, Hogan lost one of his best friends when former wrestler and fellow WWE Hall of Famer, Rowdy Roddy Piper passed away unexpectedly, due to a heart attack.  Ric Flair, who was also scheduled to be at the National on Saturday canceled his appearance.  I spent the few days leading up to the National fully expecting Hogan to do the same.

Not only did Hogan live up to his commitment to all of us who bought autograph vouchers, he also was very courteous and gracious to all of us who showed him support on Saturday.  The first thing he said when he stepped out from behind the curtain for the photo ops was thanks you to all of us for our support, and that he loved us all.  How many times have we gone to autograph signing, only to have the celebrity or athlete just toss our items back to us with nothing more than a grunt.  Some don't even say thank you.

I spoke to Hogan, after filming Chris getting his auto, and told him that I was a huge fan of his growing up.  My brothers and I all looked up to him; we practiced the "Immortal Legdrop" on each other on our trampoline.  We watched WWF/WWE every chance we got.  He said thank you.  I then told him that I had been thinking about him during this rough time in his life, and that I still looked up to him and loved him.  He responded by looking up at me, looking me in the eyes and said "Thank you, Brother.  I love you, too.  I really appreciate your support."  Then, he shook my hand and signed my photo - "To William, my brother.  Hulk Hogan." 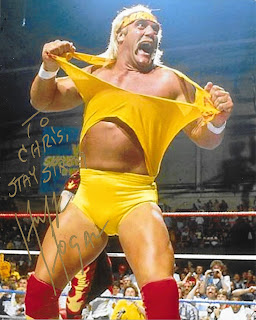 As we were walking past him, he grabbed Chris by the arm and said "Hey big man, do you know what your most important job is?"  Chris said, "What?"  Hogan then looked at me and said "Take care of this guy.  That's your job."  I teared up (I ended up letting a few tears loose as we walked back to meet up with Max and Andrew).  Here is a guy that I saw on TV so much during my childhood.  Most of those guys have died young, but Hogan is still around.  He is still honoring his commitments to the fans that made him so popular.  Yes he has been in the news for all of the wrong reasons lately, but I am a firm believer that we shouldn't be judged by our mistakes.  We should be judged by our actions.  This man took the time out of his life and schedule and allowed a father and son to share a memory.  Something my son will remember for the rest of his life, as will I.  I have lost respect for many a celebrity after meeting them in person, but Hulk Hogan gained so much more that I ever could have imagined. 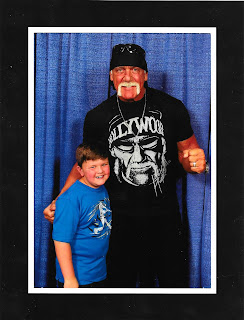 The photos are already framed, and are about to be put on the wall, once I complete this blog post.  Chris is still in disbelief that he met Hogan.  I am, too.

So, I close this entry with the video that I shot of Hogan signing for Chris.  I hope that people learn to forgive him for the things he said.  I also hope that if by chance Hogan ever were to read this, that he knows that he really impacted my son and I during those brief minutes at the show.  Thanks, Hulk.
Posted by William Regenthal at 4:29 PM