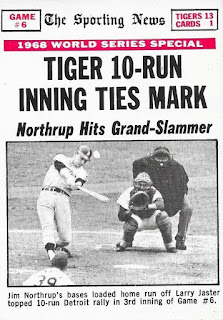 This is the sort of calm before the storm.  I am now home from The National, and have begun the arduous process of sorting through the piles and piles of cards and balls that I brought home.  I don't have a set plan on how I want to tackle all of this on the blog, but I have started showing off some of the stuff I got.  I have shown a few of the HOF signed baseballs that I got (I'm about halfway into them, believe it or not), and also some cards.

Now, I will show a few simple ones, just to get them out of the way.  At one of the tables on Friday, I picked up a couple 1965 Topps for my friend, Eric.  At that same table, I figured I would knock a couple cards off of the 1969 wishlist, since 1959 was completed the day before.  I had no intention on finishing '69 at the show, I'm still too far out on that one.

I found four cards that I needed for the set.  None of them were stars, but they helped take a couple numbers off of the list.

I hope you all are itching with anticipation to see the big ticket items that I brought home from the National.  I'll do my best to try to get at least two posts done a day, so I don't drag this out too much.  I do have company coming into town tomorrow, so I will be stretched for blog time.  We'll have to see how all of that shakes out.  Until then, take care!
Posted by William Regenthal at 1:25 AM