If You Were a Hot Dog, Would You Eat Yourself? A New HOF Baseball - Harry Caray 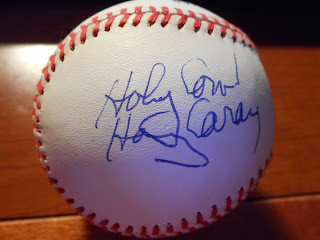 I added my 114th Hall of Fame signed baseball on Friday at the National Card Show when I made a bundle deal for this Harry Caray signed baseball.  I got another Hall of Famer thrown in with the deal, but Caray was the one I was really after. I figured that getting a Caray ball would be a good addition, since I was in Chicago.

Caray won the Ford Frick Award in 1989, making him a Hall of Fame broadcaster.  He is my 5th broadcaster.  I still don't have a single winner of the J. G. Taylor Spink award, so I probably should be looking for some of those at some point.

I'll close this blog entry with a clip from an SNL sketch that most people may associate Caray with these days.  Thanks, Will Ferrell:

Posted by William Regenthal at 9:59 AM