Chris Davis Pickups From The National 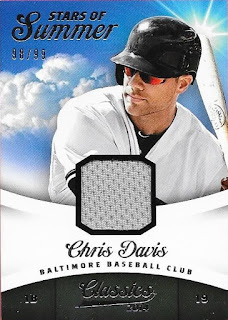 It is going to be a tough offseason, coming up.  Chris Davis becomes a free agent, along with several other longtime Orioles, and it looks like an extreme long shot for the Orioles to re-sign him.  He's been my favorite Oriole for the past few years.  He has been pretty hot lately, and I'm hoping he can keep it up so the Orioles can stay in contention.

I ended up with quite a few Davis cards from the National.  My good friend, Max, helped me find several that I needed for my PC.  The above card was in a cheap relic/auto box, and Max handed it to me as we were sorting through.  This is a 2014 Panini Classics Baseball relic numbered 98/99. 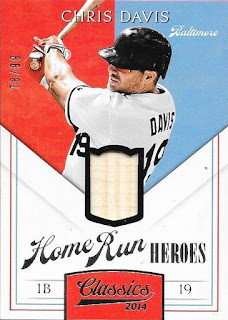 Max actually gave me this 2014 Panini Classics Baseball relic of Chris Davis, which was really nice of him.  This one is numbered 78/99. 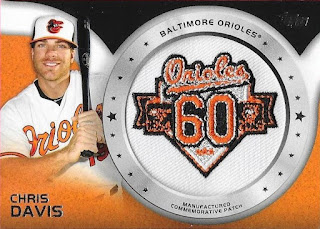 Finally, Max found me this manufactured patch from 2014 Topps.  I had the plain O's logo, but didn't have the 60th anniversary one pictured here.  I'm glad I have it now.

I'm slowly making my way through the cards that I got, but there are still a ton to go.  I also stil have some signed baseballs to get to.  In the meantime, some packages have come in, so I will have plenty to blog about for a good while.  I'm happy about that.
Posted by William Regenthal at 7:36 PM