Rocky Memorabilia at The National 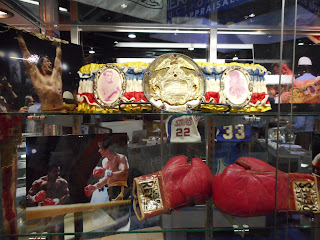 One of the things that I enjoyed most about the National, aside from spending time with my friends looking at cards, was the huge amount of memorabilia that was available at the various booths for the auction houses.  Heritage Auctions had a lot o Rocky memorabilia that had been put up by Sylvester Stallone for auction.  Above, you can see the belt used in the Rocky movies, as well as photos, gloves, etc. 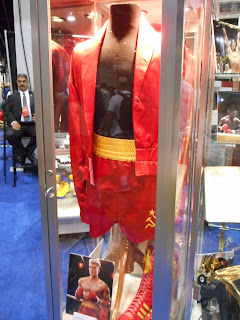 They had the ring robe for Ivan Drago, which I thought was really cool. Rocky IV is one of my most favorite movies, so seeing this stuff in person was so cool. 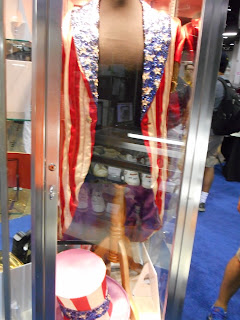 With Rocky IV being one of my favorite movies, Apollo Creed is one of my all-time favorite movie characters.  I always enjoy his entrance in Rocky IV, to James Brown's Living in America, so this Uncle Sam outfit was so awesome to see. 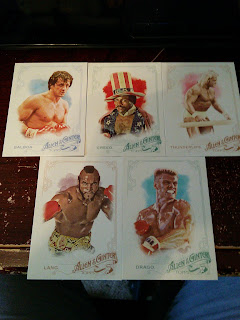 It is really cool that a new Rocky movie is going to be released in November.  It seems that Rocky stuff is all over, and is even in this year's Allen & Ginter.  I pulled Drago in a pack of Ginter before I left for the show.  I bought a box at the show, and busted it at the Topps booth in order to get the redemption packs.  In that box, I pulled Thunderlips (Hulk Hogan).  I went to a vendor who had a bunch of singles to pick up the rest of the cards in the series, Rocky, Clubber Lang, and obviously Apollo Creed.  I want to get a 5-card frame and post these on the wall.  I was really happy to get them all, and being at the National made it really east to pick up the ones that I needed.
Posted by William Regenthal at 9:08 PM