A Gift From An Amazing Friend 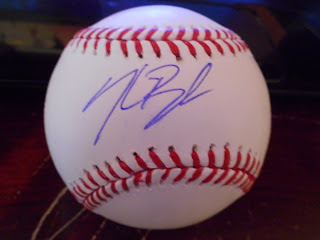 One of my favorite parts of the National was that I was able to spend the 4 and a half days I was there with some of my closest friends in collecting.  I even made a couple new friends while I was there.  I've been friends with Max, now, for over a year and a half.  He is a really great guy, and is beyond generous.

Max is a huge Cubs fan, and living in Chicago, he goes to a bunch of games every year.  Recently, he picked up this baseball for me during one of his trips.  He had gotten the ball signed by none other than Cubs rookie, Kris Bryant.  The best part, though, is that Max didn't ask for anything in return for the ball.  Well, he did ask for a graded 10 Andre Dawson auto that was given to us when we entered the show, but I was going to give that to him anyway.

At Max's house, he and his family showed us great hospitality.  They held a cookout for us, and later in the evening, I played Pack Wars with Max and Andrew.  We had a lot of fun, and even got some trading done.

I was able to see Max's "Skype Studio" during my tour of his home, which was kind of weird.  It was just different seeing what was on the other side of the webcam.  He also showed me his collection, his card setup and "man cave."  It is always interesting to see how others have their stuff set up, and Max had one of the best setups I have seen.

Max has become one of my closest friends, in the community, and outside of it as well.  He has shown me his amazing generosity, to which I will always be grateful.  I'm very happy that we met and have traded, and now have met in person.

Max is an incredible athlete.  He has excelled in football and baseball.  He advanced to the National finals in football last year in Florida.  He has also won baseball tournaments in Cooperstown.  I know he is really proud of his accomplishments, and the awards he has won mean a lot to him.  That isn't lost on me at all.

Thanks so much for the ball, buddy, and the other stuff you have given me.  I cherish it all.
Posted by William Regenthal at 6:04 PM