A $5 Mystery Pack At The National 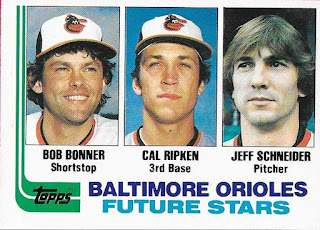 When our group was walking around the National, we stopped by one vendor who had a bunch of mystery packs for $5 each that promised vintage hits like a Bowman Joe DiMaggio, a 1939 Boston Red Sox signed baseball, and stuff like that.  We all thought it would be fun to give the mystery packs a shot, so we all bought in (Me, Andrew, Max, Frankie and Max's dad).  The first mystery pack I bought yielded a 1970 Hoyt Wilhelm and a 1966 Don Schwall.  Not too bad.  It was fun enough, so I figured I would try again, as did my friends, and my second mystery pack was much better.

I pulled this 1982 Topps Cal Ripken RC out of a $5 mystery pack.  Now my fourth '82 Topps Ripken, this was a really cool hit.  Frankie ended up with an early 50s Bowman card, which carried some value, but none of the stuff the guys pulled equaled the excitement I got out of pulling this Cal.

Yeah, I know I have others, but it still was a lot of fun to get a PC item (a rookie, at that).  Maybe I'll take the plunge sometime and get one of them graded.  I don't know.
Posted by William Regenthal at 6:46 PM