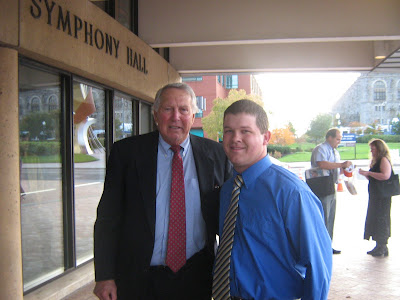 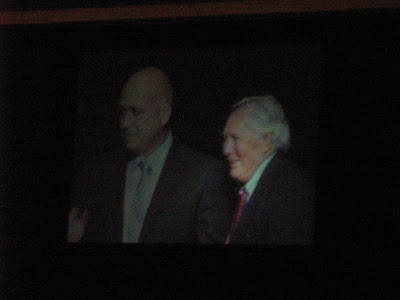 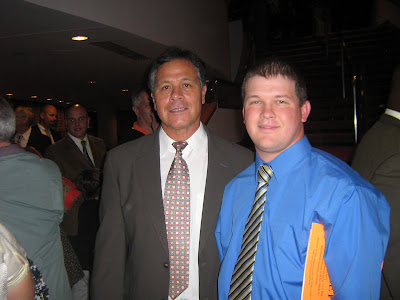 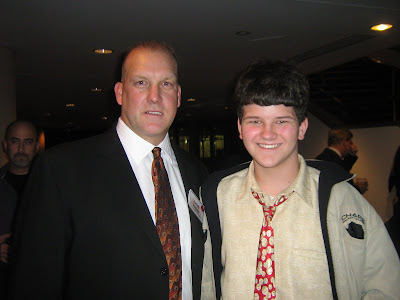 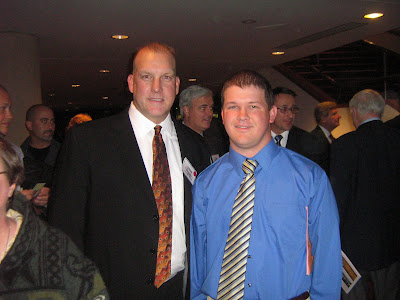 We were very happy to be able to attend the event and take part in a ceremony honoring the greatest 3rd baseman of all time; the gold standard by which all other 3rd basemen are measured. He was as nice as everyone has always said he was, and I am still in disbelief that I actually got the chance to meet him and have my photo taken with him.
Hope you guys enjoyed this as much as I did writing it up.
Posted by William Regenthal at 5:20 PM 7 comments:

Lots of new stuff and lots going on

Hi Guys. I know it's been a while. I have been pretty busy, didn't work at the shop last week beacuse we had company in town. I did go this week though and busted half a box of 2009 Topps Update & Highlights with Pete. I also bought a few packs of SP authentic as well. The scans that follow are some of the highlights...

This first card is a reprint, but was a very nice gesture from one of the kids that comes in regularly named Braxton. He's a Yankee fan (but I don't hold that against him). He messaged me online saying he picked up this card. I thought it was really cool of him to think of me, it didn't matter that the card was a reprint or not... I don't think i would have let him give it to me if it were the actual card.... 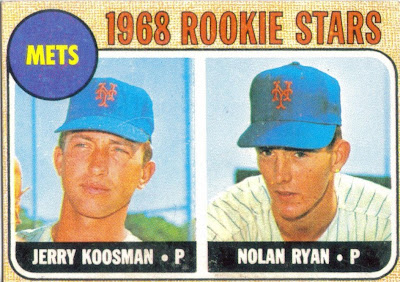 Next up is the SWEET Walter Johnson commemorative patch card. I love these things. Its also cool that my dad went to Walter Johnson High School in Bethesda Maryland... 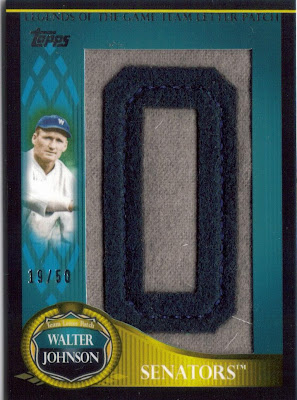 Check out the 1/1 Platinum Matt Holliday. Pretty sweet, it's my first platinum card (that I can remember...). 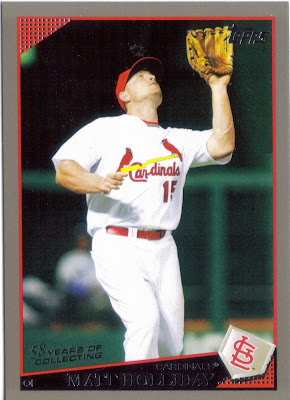 I also pulled this really nice Andrew McCutchen RC Auto. If he pans out, I'll be one happy camper.... This was a much better auto than some tht were in Series I or Series II. 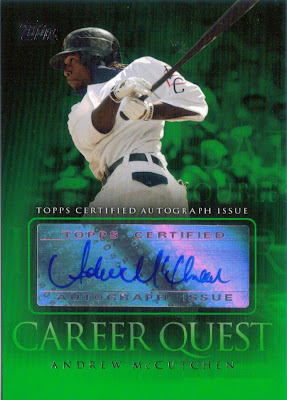 Pete and I did a pretty good job of assembling the Orioles rotation as well, nabbing David Hernandez, Chris Tillman and Brad Bergesen RCs. We also got the Nolan Reimold RC. If there is a Wieters in this set, we didn't pull it. If anyone has it, please let me know... I WANT it!!! 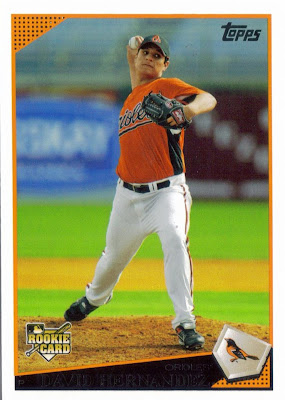 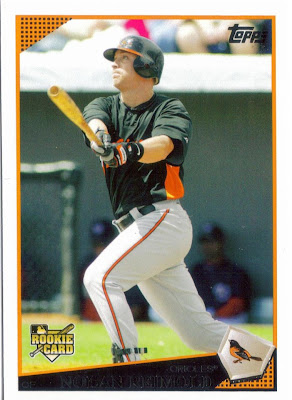 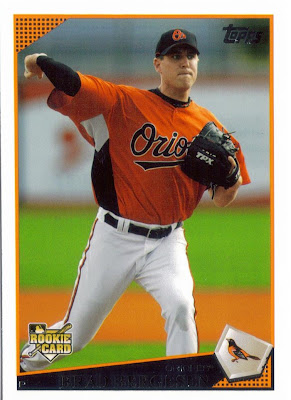 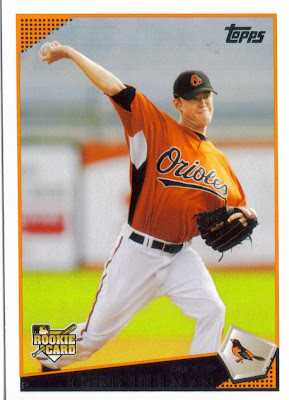 Pete brought this 2004 Bazooka Nick Markakis in with him when he arrived at the shop. Pretty sweet card, also... 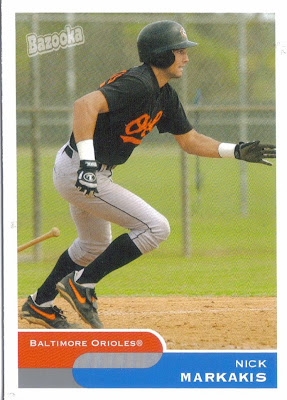 I got this Nick Markakis Victory card from another guy who shops regularly at the shop... Definitely took advantage of the fact that he isn't an O's fan... I really really like the design to the Victory cards... Very sharp!!! 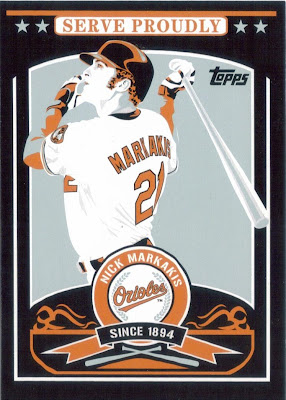 Finally, I ended up with some new Roberts for my collection. This icons card, the 2009 Topps Turkey Red (Can't go wrong with those EVER) and the 2009 SP Authentic... 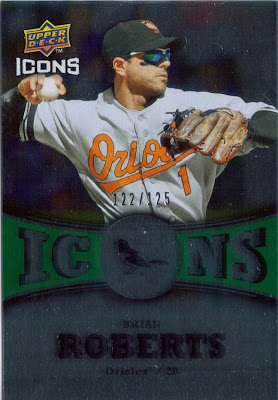 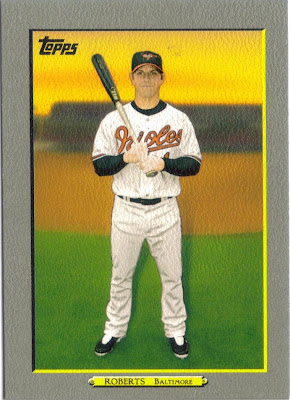 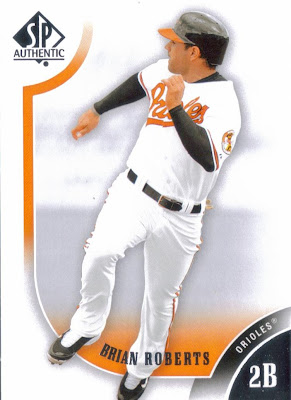 So, yes it has been a very productive past few weeks. The big event, however, comes tomorrow. I can't wait... I'm not going to spill it yet, but I will say that my younger brother Andy and I will be making a 5 and a half hour drive from Greenville, NC to Baltimore... After that, well, you just have to keep checking back for updates, now, don't you???
Posted by William Regenthal at 10:13 PM 2 comments:

A card that never was 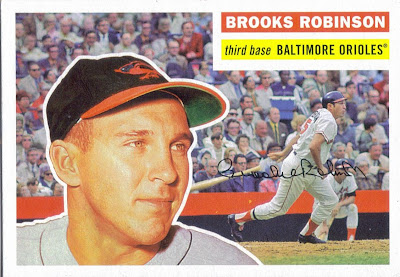 Keeping with my Brooks themed month, I got this card in the mail the other day. This is from the 2006 National card show, a 'special issue' that Topps released just for that show. They issued a few cards that were 'missing' from the 1955 and 1956 sets, and this Brooks Robinson pre-rookie is one of them. I was very pleased that Topps tried to keep it as authentic as they could, staying with the size of those cards from then, as well as the dark cardboard stock. The only thing that detracts from the authenticity is the bar on the back with the 2006 copyright. I think they should have just dont the whole copyright T.C.G. etc etc and been done with it. Oh well, thats why Im not being paid by them. Anyway, I think this is a nice addition to my collection of Brooks'.

By the way... coming up will be a SPECIAL blog... give me a few weeks and you'll see what I mean, haha.

Posted by William Regenthal at 7:57 PM No comments: 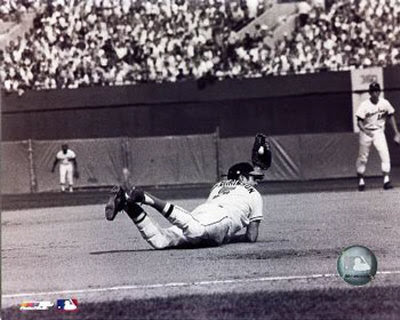 In New York, they named a candy bar after Reggie Jackson. In Baltimore, they name their children after Brooks Robinson...
Posted by William Regenthal at 8:43 PM 2 comments: