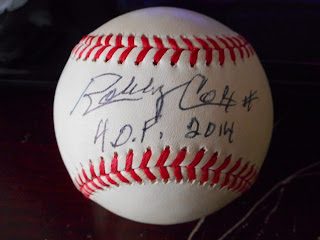 I got my 115th Hall of Fame signed baseball as a throw in when I bought the Harry Caray.  The vendor had just had this ball authenticated by JSA and hadn't adjusted his prices.  I had seen that he had three or four Bobby Cox baseballs for $45, the best price for him that I saw at the show.  I saw those on Wednesday during the sneak peek, but I couldn't remember where I saw them.  Luckily, on Saturday, I found the vendor again and bundled this with the Caray ball.  When it was all said and done, I only added an additional $25 to my purchase, so I really got a steal.

Cox was elected to the Hall of Fame by the Veterans Committee in 2014.
Posted by William Regenthal at 9:38 AM