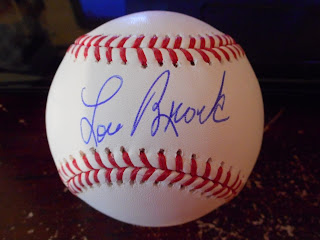 My third and final paid autograph session at the National was with Hall of Famer, Lou Brock.  He was the one voucher that I needed and could afford for my collection.  All of the other guys were a bit too expensive, so Brock was the one.

He was really nice, and I got a video of him signing for my friend, Andrew.  I'm sure it will be posted on Andrew's blog sometime soon.

Brock is my 118th Hall of Famer and was the 8th and final Hall of Famer that I picked up at the National.
Posted by William Regenthal at 5:44 PM