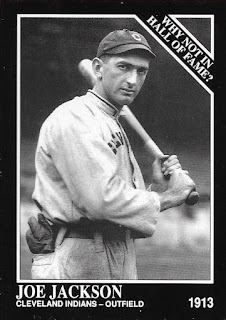 According to multiple media outlets, MLB is expected to hand down a decision on the reinstatement of Shoeless Joe Jackson tomorrow morning.  An announcement is expected to be made on the Facebook page of the Shoeless Joe Jackson Museum.  This is something that is a long time coming, considering since he died in 1951.  Since it was a lifetime ban and his lifetime is over, this makes a lot of sense.

I know the circumstances around his ban rocked baseball, and the need to be able to trust that the players are on the up and up is very important.  Jackson, if reinstated, would be something of a sure bet for the Hall of Fame.

My hope is that if Jackson is reinstated, that Buck Weaver will also be reinstated as well, especially since it is widely known that he never took any money for the 1919 World Series fix.  Weaver just didn't rat on his teammates.

We will know for sure tomorrow, and I, for one, am really excited.
Posted by William Regenthal at 6:24 PM