Bob Feller Pickups From The National 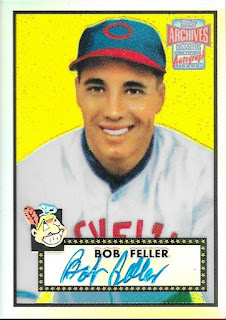 I'm always on the lookout for new Bob Feller stuff when I go to card shows.  The National was no different.  I was able to pick up two new Feller autos for my PC.

The above Feller auto from 2001 Topps Archives Reserves is a nice one that I hadn't seen before.  The card is really sharp, and was one of the last purchases I made at the show.  I bundled it with a higher end card that I still need to show (I referenced it when I was discussing Topps Sterling a few days ago). 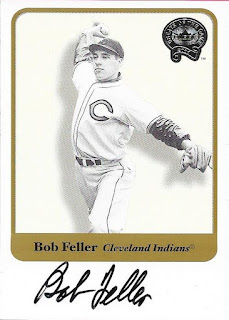 This Feller was also picked up on the last day of the show.  The night before, we all congregated at Max's house for a cookout and played pack wars.  I won the bulk of the cards, including a 2012 Topps David Ortiz printing plate.  Normally, I would have contacted my friends Joey, or Scott, who collect the Red Sox and would have offered it to them.  Instead, I decided to take it to the show on the last day and see what I could flip it for.

It took me two tables/vendors to find a match, and when I offered the plate for this Feller, the vendor said "Sure, I'll do that trade."  So, I was able to take a card I won in pack wars and flip it for a nice PC pickup.  An autograph (on card) of one of the greatest pitchers ever.  I was happy with that deal.

The card is a 2001 Fleer Greats of the Game and, again, the auto is on card.  It looks really sharp scanned.
Posted by William Regenthal at 5:48 PM