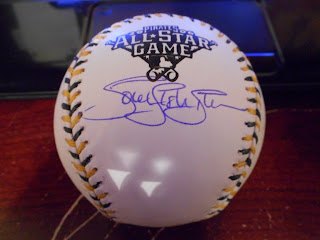 The first signer I got at the National was during the Wednesday Sneak Peek, right after I got off of my plane.  I had rushed to the show, got my VIP pass and vouchers and quickly met up with Max and Andrew.  They helped me find the Schoop patch, then it was off to the autograph pavilion to try to get signatures.  There was no line for Tom Gordon, and I had purchased this 2006 All Star OMLB specifically for Gordon.  I was afraid I wouldn't be able to get his auto, since my plane landed so late, but I was happy to see that Gordon was still there.

He was really nice to Max, Andrew and I, and talked to us for quite a while.  He told us a story about who the toughest players he faced were, naming guys like Manny Ramirez, and others.  He then decided after naming several names, that he would be better served telling us who he owned.  He told a story about how he absolutely owned Roberto Kelly, so much so, that he struck him out so much, that Kelly threw his bat to the ground as hard as he could after on futile at bat.

I closed up our meeting with Gordon by telling him that he has been really fun watching his son, Dee, play ball, and that I had seen Dee play since his time with the Lookouts.  Gordon thanked me, and said that his son was a good kid and would be signing autographs at The National like him some day.  He's right.

I was really happy with how meeting Tom Gordon went.  That session alone made my getting the VIP passes worthwhile.  I was so happy to see how good he was wish everyone he signed for, and that he went out of his way to make us all feel like we were having a great time.  He won some new fans that day, for sure.

My ball got the full name and nickname signature: "Tom Flash Gordon".
Posted by William Regenthal at 8:46 PM