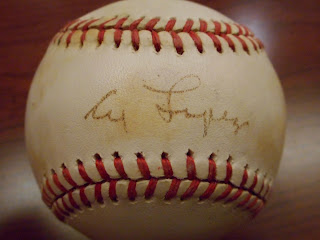 I added my 112th Hall of Fame signed baseball on Thursday when I got a nice deal for this Al Lopez ball.  The ball is toned and faded, but still looks really cool.  Getting Lopez for the price in which I got it was definitely a steal, since he usually goes for north of $150.

He was elected to the Hall of Fame in 1977 by the Veterans Committee.
Posted by William Regenthal at 12:55 AM