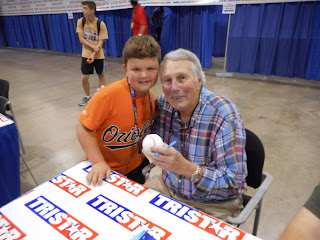 Our second paid autograph signing at the 2015 National was with my favorite Oriole, Hall of Famer Brooks Robinson.  Yes, I love Cal Ripken, but I do believe that Brooks is my favorite Oriole of all time.  I had met him once before, in 2009 at the "Evening With Brooks" in Baltimore.  I was so star struck then, I wasn't able to get but a few words out.  This time, I said a lot more to him, thankfully.

My son, Chris, got to meet Brooks as well.  When I was buying up autograph vouchers, I made sure to get Brooks, and I really wanted Chris to meet him.  He was gracious as always when he met us, and chatted a bit with Chris.  Chris was wearing his uniform shirt from this season.  He played on the Orioles and his uniform number that was randomly assigned to him was 5.  Brooks's number. 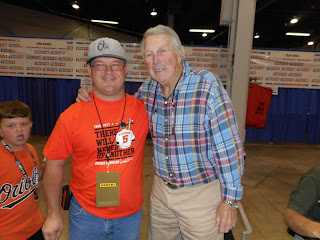 When I got up there, he paused and looked over my picture.  I told him it was from the Evening With Brooks, and how much I enjoyed meeting him then.  I told him he was my favorite, and how much it meant to me when he yelled back "I love you, too" when I yelled out "We love you, Brooks!" during the 2013 Hall of Fame parade.  I then asked him if I could get another picture, which he happily obliged. 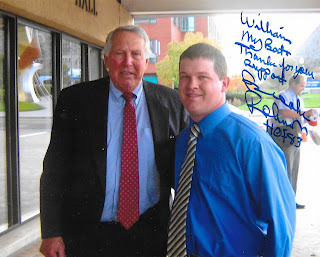 Here is what I had signed.  He signed the photo: "William, my best.  Thanks for your support. Brooks Robinson HOF 83.

Brooks is probably the most approachable Hall of Famer that there is.  The two times that I met him, he was amazing, and I have always heard stories about how awesome he is with fans.  As you can see, Brooks has aged over the last 6 years.  He has battled various health issues of late, but seems to be a lot better than he has been the last couple of years.  I attended the Evening With Brooks in 2009, and then I was at the game where the Camden Yards sculpture of Brooks was unveiled and dedicated.  He means the world to the Orioles franchise, and to Oriole fans everywhere.  It was always said that "They named a candy bar after Reggie Jackson in New York, but in Baltimore, they named their kids after Brooks Robinson."

I am so very thankful that I got the opportunity to meet Brooks again.  I'm also very glad that Chris got to meet him as well.  To close, here is the video of Chris and Brooks.  Thanks for reading!