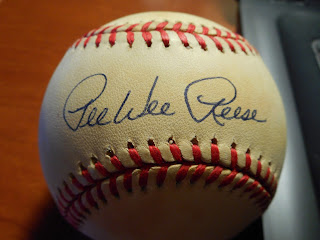 I have added several Hall of Fame signed baseballs to my collection through the first day at The National.  Like I said in last night's post, I went well above what I had budgeted for the day, but I knocked out so much of what I had set out to get, it makes the next few days more of an opportunity to just pick up random things.

Reese was elected to the Hall of Fame in 1984 by the Veterans Committee.
Posted by William Regenthal at 9:26 AM