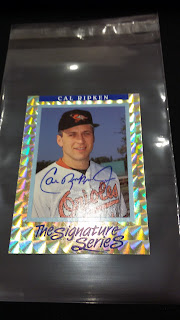 I'm going to do a day-by-day recap of the National Card Show when I get back home, but I will be posting bits and pieces while I am here.  Today marked a big day for me in my collection.  I have been collecting Cal Ripken since 1990 and today marks my most anticipated addition to that PC.

Since it was issued in 1992, I have always wanted the 1992 Donruss Elite Cal Ripken autograph.  One of the first autos issued in packs (I think UD did Reggie Jackson a few years prior), this was a sought after card back during the Junk Wax era.  I opened a ton of 1992 Donruss, just to find that I didn't have a magic touch that would yield this card.

Fast forward 23 years and I was finally able to track down a nice version of this card at the 2015 National Sports Collector's Convention in Chicago.  Max, Andrew and I walked around the show all day today asking vendors if they had this card.  Each search turned up empty, and most requests caused vendors to look at me like I was crazy.

Finally, around 3:45 PM, Max had to leave, but Andrew and I hooked up with my good buddy, Frankie (from the blog - My Life in the Sports Card Hobby), and after about 5 minutes into resuming our search, we found the card.

Let's just say that the vendor told us later that my reaction to when he said he had the card made the show for him.  I was so very happy that I got the card.  I paid the sticker price for the card, as the vendor didn't budge, but it really was a fair deal (he did throw in a Brooks Robinson auto).  My budget for the National is already busted, but I met all of my goals.  By the way, this card is numbered 3,202/5,000.  Frankie was kind enough to give me a magnetic case and a team bag to slab it in.

I'm so happy that I found this card, and I'm even more happy that I was able to experience the thrill of the hunt for it with several of my close friend.  This sure beat landing the card on Ebay and it coming in the mail.  I enjoyed the quest with Max, Frankie and Andrew, and to me, that made getting it even more special.

Please continue to check back to see our progress from The National.  We are only one full day into it with three to go.  The next few days surely won't have as much cash change hands, but I do intend on continuing to pick up several items for myself and some friends.
Posted by William Regenthal at 12:47 AM