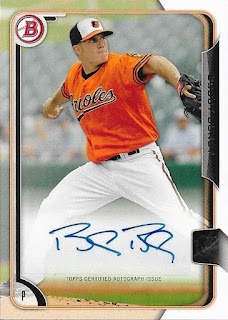 It is often forgotten that there is another Bundy in the Orioles organization.  Dylan Bundy's older brother, Bobby, is also a pitcher in the O's minor leagues.  Drafted by the Orioles in the 8th round of the 2008 amateur draft, Bundy has slowly made his way up the ranks in the system.  He is currently at AA Bowie.  He has played in 8 games, pitching 15 innings this season.  Both Bundy's have been quite injury prone, and it seems that neither will be with the Orioles after this season.  That really is a shame, since Bobby's younger brother, Dylan, has been such a highly touted prospect.

I got this card, a 2015 Bowman auto, from my friend, Nick S. on Instagram.  Nick approached me and asked if I would be willing to take a deal for the card, and I accepted.

Nick was also nice enough to include a 2014 Topps Mini gold parallel of former Oriole, Nick Markakis in the deal.  This card is numbered 57/63.  I sure do miss Nick patrolling right field for the Orioles.  It really is a shame that he wasn't resigned this offseason, but the O's were worried about a neck condition that Markakis had.  The condition is, in fact, evident this season, as it has sapped him of his power.  He typically averages 16 home runs a season, but through 81 games this year, Markakis has none.  He is batting a nice .295 with 91 hits so far this year, but the power is gone from his game.  I fear that he is definitely on the decline.  That being said, I still respect Nick as a ballplayer, and miss him on my team.  He was great for the Orioles, and I know he is missed among O's fans.  Maybe one day, he will return to the organization.

Thanks for the deal, Nick, I appreciate it!
Posted by William Regenthal at 6:07 PM