I Got My Autograph Voucher Tickets Today 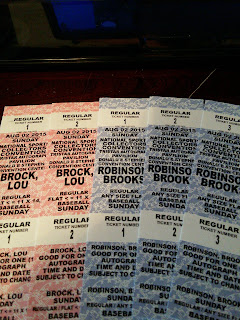 The National is creeping ever so closely now.  Today, I got my autograph voucher tickets for the first two sessions that I purchased.  Last time when I went (2012) I had voucher numbers 4 and 5 for Ralph Kiner and 9 and 10 for Frank Robinson.  Funny thing is, both of those guys canceled and I ended up with Jim Rice and Joe Morgan.

I just think it is really cool that I got numbers 1-2 for Brock and 1-3 for Brooks.  I imagine my numbering for Hulk Hogan will be a bit higher, since I bought these during the pre-sale and waited a bit to get Hogan.

How it works is, they call the tickets by number, so, like 1-50 will be called, then 51-100, and so on.  So, since I am so low, I can camp out and get in line quickly, get my stuff signed, tell Brooks he is amazing, then head on over to Lou Brock.  I think this will work out in my favor, since both of them are signing on Sunday.  I won't be stuck in a line forever and can make sure I have enough time for both guys.

I need Brock on a baseball for my HOF collection, and I am getting Brooks on an 8x10 photo of he and I together.  Chris is getting Brooks on a ball.  Andrew is also going with me to Brooks and he has some plans of his own for Brooks that I'm sure he will share on his blog.

Andrew is accompanying me to Brock, and both of us are getting him on baseballs.
Posted by William Regenthal at 8:31 PM