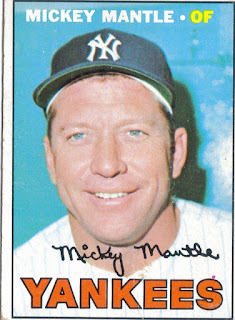 Lately, I haven't had much to write about, so I have been working toward straightening up and getting ready for the National.  One of the things I wanted to do was list out all of my needs for the 1967 Topps set.  Not because I am officially doing the set at the moment, but it gives me a finite list, just in case I see some deals.

I realized that I need a lot more cards from the 1967 set than I initially realized.  I also realized, however, that I had a lot more big names than I realized as well.  I already have Mantle, Banks, Stargell and Rose, to name a few.  Not bad.

One of my main goals is to complete the 1959 set while I am there, and maybe another would be to make a dent in the 1969 set.  1967 will definitely be on the backburner, but I am happy that I took the time to list what I needed.  It will help me to go in there with lists of what I need, instead of going in blindly and being overwhelmed by everything.  We shall see if it helps.
Posted by William Regenthal at 10:57 PM