A Gnome In The Mail 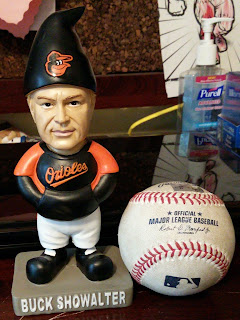 I'm not in a good mood.  A look at the box scores from this past week would indicate that the Orioles are not a very good team right now.  I sincerely believe that their hitting coach should begin to print off some resumes, because he really hasn't shown me much of anything this season, except for brief flashes here and there with a few players.

So, on a day where the Orioles make like they will never win another game, I got something in the mail that instantly cheered me up.  I got my Buck Showalter garden gnome in the mail from my friend, Michael.

The garden gnome is really cool.  I got a Rangers one a while back from my buddy, Sam, but this one is so awesome because Buck really didn't enjoy it.  He made like he didn't at least.  I think it is awesome, and will put it up once I am done writing this post.

The baseball Michael sent is a game used baseball from the Orioles 5,000th win since the franchise moved to Baltimore.  Michael found it at the Orioles memorabilia store, and immediately picked it up for me, knowing that I would want it.  I don't know if I will get it signed by anyone, but at this moment, it will be put up as well.

Thanks for the stuff, Michael.  Maybe the Showalter gnome will now bring some good luck to the club and they can start to hit their way out of a wet paper bag.
Posted by William Regenthal at 5:37 PM