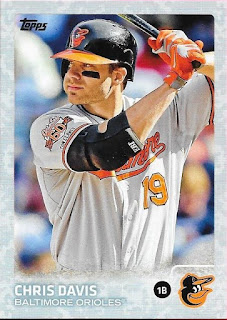 I got another Chris Davis parallel knocked off of my list.  This snow camo parallel was less than $5 on Ebay, and is numbered 70/99.  I have knocked out a couple of his parallels so far, most notably, the clear acetate parallel.

Davis has been hot lately, smashing two home runs last night, and is at 18 on the season.  I'm holding out hope that the Orioles can keep him beyond this year, but with Scott Boras as his agent, it looks like Davis will be playing elsewhere next year.  I'll still be a fan of his, unless he signs with an AL East team.

Until that day comes, I will continue to keep finding parallels.  Actually, if he does, in fact, sign with another team, I will still PC his Orioles cards.
Posted by William Regenthal at 10:11 PM