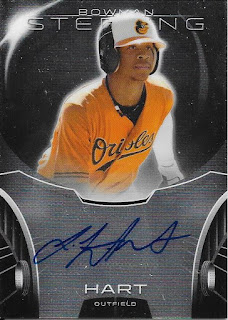 I completed a trade recently with my good friend, Noah.  He landed a ton of Tigers cards and I got some cash, and a couple Orioles autos.  One of the autos is the above Josh Hart and the other is not pictured, but was my third 2011 Bowman Sterling Mychal Givens auto.

Hart and Givens have both done well for the Orioles this year, especially Givens.  A former shortstop, Givens was converted to a reliever.  With his unorthodox sidearm delivery, he has been tough to his this year.  He even got a tast of the majors this month.

Hart is currently batting .290 for low A Delmarva and should see some time at high A Frederick this season.  He was a first round pick by the Orioles in the 2013 draft (#37), their second pick of that round behind Hunter Harvey.
Posted by William Regenthal at 9:43 PM