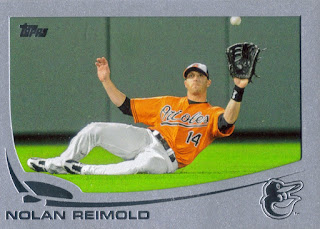 Today is a great day for this blog as the Orioles are expected to select the contract of Nolan Reimold from AAA Norfolk tomorrow before their series starts with Boston.  Nolan has battled a neck injury over the last few years that is believed to have occurred when he dove into the stands to catch a bal against the White Sox a few years ago.

I've met Nolan several times and his wife, Jenny, is a friend of the blog.  I am really happy that Nolan will make his way back to Baltimore.  Hopefully, his past injuries are behind him and he can be a huge contributor to the MLB team.

Nolan was batting .286 with 2 homers over 46 games with Norfolk.  I think the O's will put him in the leadoff position, since he does well getting on base.  If that works out, then Manny Machado can slide down to the second slot in the lineup, where he has played much better.

The question is, who gets removed from the team in order for the O's to add Reimold to the 40-man roster?  I think Steve Pearce is in danger, but it could be Travis Snider or David Lough, as well.

Good luck, Nolan, I'm happy to have you back!!
Posted by William Regenthal at 11:45 PM