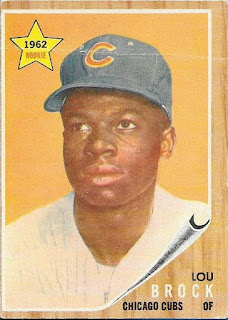 I'm more tired tonight than I was last night, but I managed to get through today's card show without incident.  My wife wasn't able to come and help today, so, I was a one man show, but managed to work out just fine.  I ended up selling a decent amount of stuff today, even though the show itsle fwas pretty slow.

I had plenty of time to get up and move around, so I found a fellow dealer who had some low priced vintage, which I browsed a few times.  In his bargain bin, I found a good bit of well loved vintage that I needed for my collection.  The above Lou Brock is badly creased, but still a nice card.  I got it for a steal (can't remember the price). 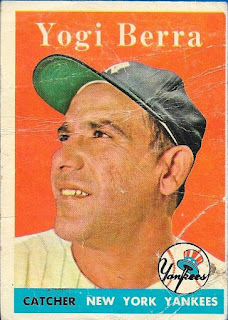 You can see that this Yogi is pretty beat up, but one that I needed in my collection.  I like it, and got it for less than $10. 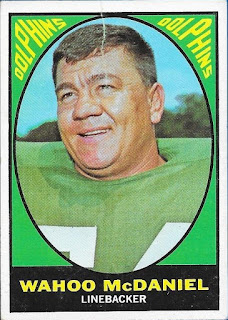 This is now only the second vintage football card that I have.  I never once saw Wahoo McDaniel play a game of football, but I did see him a lot in another venue.  I used to watch Chief Wahoo McDaniel on Mid Atlantic Championship wrestling take on the likes of Nikita Koloff, Tully Blanchard, Magnum T.A., and of course, the one and only Ric Flair.  I watched a lot of wrestling as a kid, and McDaniel was one of my favorites.  To be honest, I was really excited to get this card for $9.00. 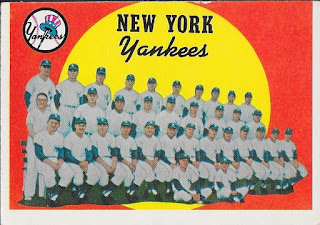 I got this 1959 Topps card from the guy.  This is actually the same guy that I got yesterday's 1959 Topps set needs from, so I ended up with 6 from him.  The back of this Yankees team card is unmarked, so that's a plus.  Also, it is a high number. 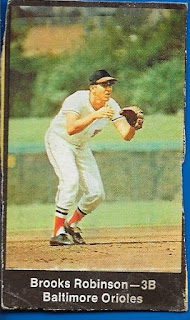 An oddball Brooks Robinson card that I didn't have in my PC was this 1969 Nabisco Team Flakes card.  The guy (Kurt) told me that this was a tough find, and I believe him to be right.  I got this one for $10, and others in fat better shape, are commanding a much higher premium on Ebay. 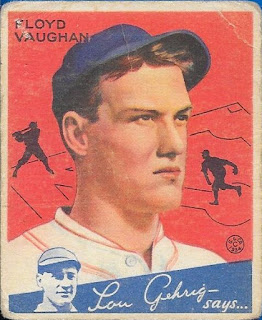 Kurt was a really nice (and patient) guy, and I would find out later after he delivered my cards to my table (since I had to run to attend to a customer, then pay Kurt via PayPal).  I didn't even look through my stuff until a little while later, only to discover that Kurt had added free extras to my stack.  I said yesterday that I had no cards of Hall of Famer, Arky Vaughan; well, I now have TWO.  I have his 1933 and now 1934 Goudey cards.  Pretty cool! 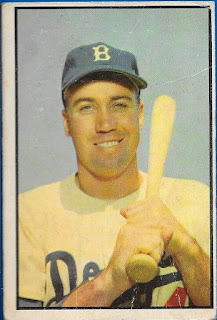 This 1953 Bowman Color Duke Snider was a nice find in the stack as well, then I discovered why it was free... 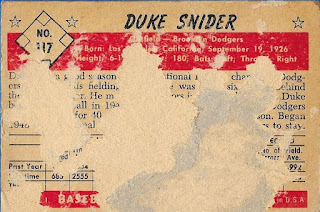 This appears to have come from the same vendor who I got my Feller from.  I bet the Snider and Feller were part of the same collection, and Kurt must have picked it up yesterday, only to decide to hand it off to me.  I actually think it is really cool that this and the Feller resided a couple pages from each other for countless years, only to find themselves reunited in my collection.  Kind of cool, I think. 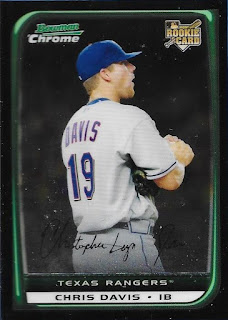 So, I had $15 left to spend from the budget that I had allotted for myself.  I saw this 2008 Bowman Chrome Chris Davis at the table across from me, so for $5, I picked it up.  Only thing was, the vendor didn't have $5 in change, so I asked him if he would sell me the below Andrew McCutchen for an additional $5, so I could just give him the $10 I had in my pocket. 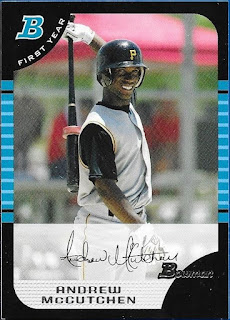 He made the deal, and I got this McCutchen RC that I needed.  I probably had one before, but that was way back in 2005, and I probably let it go in an Ebay lot back then.  Who knows.  I'm just glad to have another. 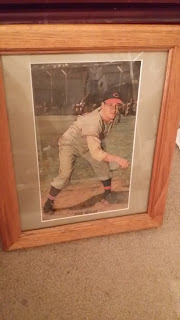 Finally, as the show was winding down, and I was about to leave, I figured I would go ahead and burn the last $5 I had in my pocket.  I milled about until I saw this framed photo of Bob Feller.  As luck would have it, it belonged to Chandy, a guy that I have known since I was a kid, back when I first began collecting.  Chandy operated one of the two former shops that were in Winston-Salem when I was a kid.  He closed up back in 2005 and strictly does shows now.  I talk to Chandy every time I can when I am at shows, and he is always handy with advice and knowledge.  I asked him if he would take $5 for the Feller photo, and he said he would since it was a larger piece and he didn't was to lug it around.  Score for the Man Cave!!

So, I had a really successful card show, and I am seriously considering signing up for the three day show in July, right before the National.  That would continue to help me clear out room, and maybe raise just that much more money to take with me to Chicago.  We shall see, but I bet I do the July show.  I had so much fun this time, why pass it up?
Posted by William Regenthal at 10:32 PM