A Surprise Care Package From Jory 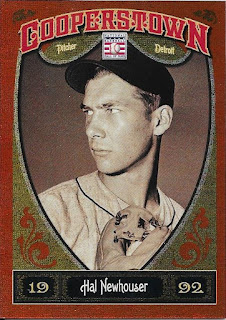 I got a surprise care package in the mail the other day from my very good friend, Joey.  Joey was one of the first group of kids I traded with on Instagram.  Joey was the recipient of some sweet Red Sox cards that I had been holding for him, and I guess the care package was in response to that.  I didn't send him stuff so that I could get stuff in return, I just liked finding cards for his collection.  Joey is such a nice person, it makes helping him out so easy, really.

He sent me a bunch of Orioles cards, but some of the most remarkable cards in the package were non-Orioles.  There were 4 of the orange parallel cards from 2013 Panini Cooperstown.  The scan didn't really do the Newhouser card justice, but trust me when I tell you, they look nice in person.  The Newhouser card is numbered 290/325.  He is one of those guys, who a lot of folks don't realize is a Hall of Famer.  His two AL MVP awards as a pitcher are a huge reason why, but he definitely was a great pitcher in his day. 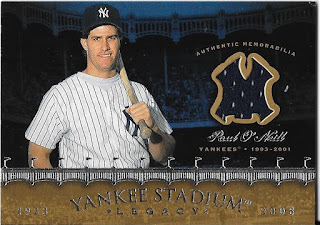 Joey caught me way off guard with this card.  This is a Yankee Stadium Legacy relic card of Paul O'Neill.  O'Neill is definitely one of those great Yankee players.  While I have a huge disdain for the Bronx Bombers, O'Neill always had my respect.  He was just a good ballplayer.  I have his auto, given to me by my sister-in-law, since they share a relation (I believe he is married to her cousin).

I really appreciate the package, Joey.  Thanks so much, but more importantly, thanks for being a good friend.
Posted by William Regenthal at 11:02 PM