A Trade At The Card Shop 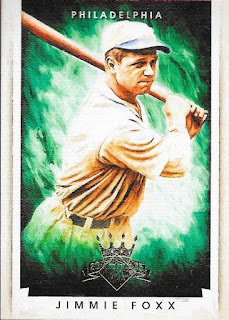 Last Saturday, Chris and I were bored and went to the card shop like usual.  Wendell, the shop owner, has a new guy working there named Jacob (who is in his late 20s).  Jacob seems like a pretty cool dude, albeit a Red Sox fan.  Already, Jacob has a following.  One of the other shop owners in the shopping center sends her son into the shop on Saturdays, and he helps out where needed.  This Saturday, he was folding boxes.  Immediately, he and Chris got to talking, since it appeared that they were about the same age.  It turns out, the kid is named Matt, and is 11 years old.  So, he and Chris chatted for a bit and played some darts in the back room while I chatted with Wendell and Jacob.  I purchased a few packs, and allowed Chris to grab a few as well.

Matt wanted to see what Chris pulled, so Chris opened the two packs I got him (a jumbo pack of 2015 Topps, and a pack of 2015 Panini Diamond Kings).  Matt really liked the Diamond Kings, so he showed me his box of cards he was carrying around the store.  It looked like he had opened a few packs, and had some decent base cards.  I noticed really quickly that Matt liked Hall of Famers.  He had made a point of telling Chris that there were Babe Ruth cards in the Diamond Kings packs, but he had yet to pull one.  He also made mention that he really wanted a Ty Cobb card.

So, I opened my pack of Diamond Kings to see if I could pull the Ruth that he was after.  I didn't, but I pulled a couple Hall of Famers that Matt liked.  I had noticed a card that he had in his little box that I asked him about.  Would he be interested in trading me the Jimmie Foxx, if I gave him a good Hall of Famer. He said he would, so I handed him a Roberto Clemente that I had just gotten out of my pack.  He loved the Clemente and quickly handed me the Foxx (shown above).  He also handed me a nice David Ortiz, saying "Here, you can have this, too."  I thought it was really sweet that this little guy was willing to make trades, and was so happy to have folks to talk cards with, that he gave a free card.

I gathered Chris up, thanked Matt for the deal, and the extra card, then said my goodbyes to Jacob and Wendell.  I made the quick drive home, put up my cards, then looked through a stack that I had on my card desk; some Hall of Famers that my good friend, Max, had sent me.  In it were a few cards I could spare, so I put some in a team bag, along with an Orioles rally towel, then drove BACK to the card shop to surprise Matt.

When we got back, I told Matt that I had some stuff for him, so he came from the back room and gratefully accepted the rally towel and the cards.  However, he didn't open the team bag.  He turned around, and went back to work, since he was helping Jacob assemble storage boxes.  It wasn't until he had completed his task, that he went back and opened the team bag.  I was really impressed that this young man made sure his job was finished before he sat down to look at some cards.

Matt tore open the team bag, and his jaw dropped.  What were "base" cards for me, were treasures for him.  There were 5 Babe Ruths, 2 Ty Cobbs and a Yogi Berra.  I wish I had taken a picture of the look on his face, because he was so amazed that he now owned several Babe Ruth cards.  I was really happy that I made this kid's day, and hopefully, he will cherish those cards as his collection grows.

It was a pretty cool day at the card shop, to say the least.
Posted by William Regenthal at 11:01 PM