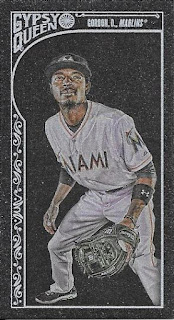 A few weeks ago, I picked up a couple packs of 2015 Gypsy Queen, not expecting to pull a lot, but when the mini card slid out from under the other cards in the pack, I got a nice surprise.  The card was no ordinary mini card, it was this 1/1 graphite parallel of Dee Gordon.

The card is incredibly thin.  I took it back into the shop and put it in a screwdown for tobacco cards, but the card still slid around inside the case.  So, the shop owner cut up one of his business cards to slide behind the card to give it a little more thickness, which worked.  The fact that he used the actual card itself to match up with the business card while he was cutting, well, the both of us were wide-eyed as those scissors came down.  After it was all said and done, I laughed and said, "You don't know how close you were, with one slip of the hand, to seeing a grown man cry."  He looked at me and said "You mean two grown men.."

Wendell is a good man, and I had all the faith in the world that he wouldn't mess up my card. 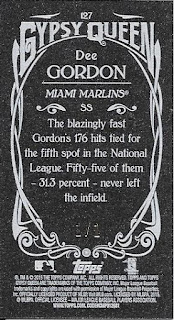 The card is awesome.  I really wish it was an Oriole, but Dee Gordon is having a fantastic year.  I don't often pull actual 1/1s, so this was an epic pull for me.  I've had people ask me to trade this, but I believe that I will hold onto it, at lease until I can get the Chris Davis (if at all possible).
Posted by William Regenthal at 5:28 PM