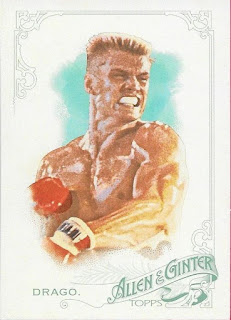 An early blog post today, since I am going to be heading to the airport in a little while to begin my trip to the National.  I added something to my list of things I wanted to do, since I stopped by my LCS at lunch yesterday.  I bought four packs of 2015 Ginter since I had heard that there were cards of characters from the Rocky series of movies.  My goal is to get all of them, but the Apollo Creed is the one I really want.

In the four packs, I did pull one of the characters, Drago, from Rocky IV.  The movie that ended the Cold War is one of my all-time favorites, so I was happy to pull the Drago.  I would really like the Dolph Lundgren autograph, since the pose is different (look it up, it's awesome!).  I also wouldn't mind pulling the Sylverter Stallone auto, you know, since it is selling for a few grand on Ebay. 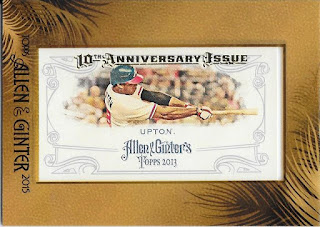 I did have another nice pull, this 10th Anniversary framed Justin Upton card was really nice.  It is not numbered, but looks really cool.  I saw a Brooks Robinson on Ebay last night while looking around, so I may pick one up at some point.

So, I think I want to bust a box of 2015 Allen and Ginter while I am at the National.  I know prices will be pretty good for boxes, so this is something that is well within reach.  I wonder if the guys I'll be meeting up with would want to bust a box as well?  A pack opening party is always a good time.

Anyway, next time I blog will be from the Windy City.  I'm really excited to see what is in store for us at the National.
Posted by William Regenthal at 9:40 AM