Trade With Michael - Relics and Autos 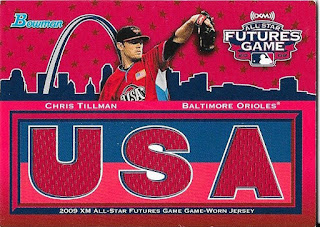 I worked out a deal with my friend, Michael, pretty quickly the other day and landed a few nice cards for my collection.  This triple relic Chris Tillman card is really cool.  It is numbered 36/99 and came out of 2010 Bowman.  Tillman has been rough this year, but that has kind of been the O's season.  Good at points, really rough at others.  Uggh.  Oh well.  At this point, I've accepted that Tillman is probably a #3 or #4 starter, but we have him as a #1, and that isn't going to cut it.  I wish he would turn it around and be the dominant pitcher I know he can be, but something just isn't right with him this year. 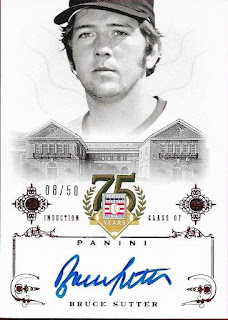 I picked this 2014 Panini Hall of Fame signed Bruce Sutter up from Michael in a mystery envelope for $5 that he was running.  I got the card to round out my purchase, and I was pretty ok with what I pulled.  It is a nice-looking card and is numbered 8/50, so that's not bad. 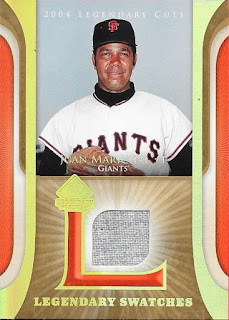 Finally, Michael threw in this nice 2004 UD Legendary Cuts relic card of Juan Marichal.  Michael knows how I like wool jersey cards, so it was cool that he remembered and added it to the package.

Thanks for the deal, Michael.

I'll probably be holding off on any more deals (aside from the cards I have coming in this week) until after the National at the end of the month.  I am selling at the Raleigh Card Show from July 24 to 26 to raise some more funds, then it is off to the National.  I have a few things I intend to pick up, so I need to save as much as I can.
Posted by William Regenthal at 10:32 PM