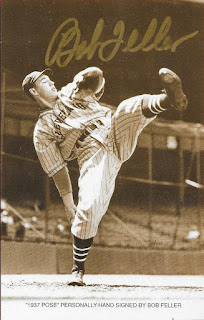 I got a nice surprise in the mail today.  A guy I know from Instagram, Jacob, sent me this Bob Feller signed post card as an apology for something he did a few days ago.  I won't get into what happened, but the fact that he apologized was enough for me.  I definitely didn't expect anything in the mail, and I was very surprised when he told me that it would be a Bob Feller autograph that he would be sending.

I have PCed Feller since 2010, now, and have quite a few autographs and cards.  Feller was an amazing pitcher in his day, and was also a great American.  I really appreciate Jacob sending this autograph, even though it wasn't necessary.  I accepted the apology well before the gift was sent.  That being said, though, I'm keeping this!!

Thanks Jacob.
Posted by William Regenthal at 6:08 PM