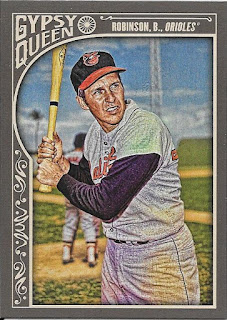 It has been a struggle lately to find stuff to write about.  I have been trying my best to save money for The National, which is in less than two weeks.  So, I haven't been buying much, and with the Raleigh card show coming next weekend, I haven't made very many trades.  I have been hoarding my trade bait so that I have some stuff to sell at the show.  Hopefully, I can raise some additional funds for my National trip.

I have, however, bought a few packs of cards here and there, some of which have been 2015 Topps Gypsy Queen.  I guess you could say that I have bought the packs in hopes of pulling another 1/1, like the graphite parallel of Dee Gordon that I pulled recently.

I always enjoy Gypsy Queen when it comes out, mainly since it is flush with Hall of Famers.  I was very pleased to pull the above Brooks Robinson.  The card was a nice addition to my Brooks PC.  The set, as a whole, is nice.  I do believe that Gypsy Queen, much like Allen and Ginter, may be losing its luster.  I think Topps should maybe feature some other vintage designs, like American Caramel, Old Judge, or something like those.

What do you guys think?  Which past brand/design should Topps revive next?
Posted by William Regenthal at 11:12 PM