According to the MLBPA and various news outlets (one of which was XMs MLB Radio), Ryan Braun has won his appeal against his suspension for testing positive for PEDs.  Apparently, he was correct in saying through his representatives that unusual circumstances triggered his positive test result. 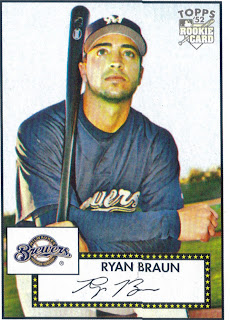 I, for one, am glad that Braun won his appeal.  Baseball does not need one of its stars tarnished if he is innocent.  The biggest problem with it is that the positive result was supposed to be confidential until after the appeal process had been completed.  Unfortunately, we now live in a world where each and every 'news' outlet is scratching and clawing to break stories first, so Braun's name and reputation was disregarded when news of the positive test was leaked to the press.  I think MLB should look long and hard at whomever leaked the result before the process was carried out and they should serve a swift and severe punishment.

Congratulations to Braun.  Maybe now he can move forward and rebuild his reputation.  I'm sure a lot more info will be coming out as to what triggered the positive result.  I'm really curious to see how it happened.
Posted by William Regenthal at 5:29 PM

I agree, I'm so happy he got it appealed.

I am one happy Brewers fan right now!!!

saying through his representatives that unusual circumstances triggered his positive test result.

Reports now are that Braun won on a technicality that the sample was handled improperly.

Brewers fans can spin this any way they want to. Naturally, they can't be expected to be objective.

Yes it was a technicality, but he has been tested many times before and passed. His follow up test passed. If Braun is, in fact, a cheater (i.e. Manny), then he will fail another test and I will change my view of him. In the meantime, he was granted his appeal, the positive test is thrown out and it should have never seen the light of day in the first place. I'm not a Brewer fan, but I am glad that it is over. For now.

I don't care what anybody says, I want to like Braun, so I'm going to like him without a doubt. I thought his apology was sincere and believable, and that as baseball fans we should pray for things to go RIGHT, not wrong. So to disappoint yourself by believing that he DID use steroids really doesn't seem necessary to me. Just my take.